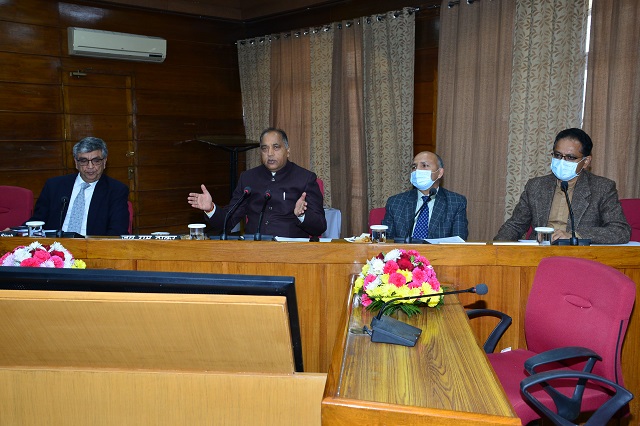 Roads are the lifelines for hilly State like Himachal Pradesh due to limited mode of transportation and therefore thus top most priority must be given for proper maintenance and construction of roads.  This was stated by the Chief Minister Jai Ram Thakur while presiding over the review meeting of the State Public Works Department, here today.

Jai Ram Thakur said that a special drive must be initiated by the department for major district and rural roads to carry out patch work and tarring so that the commuters did not face any inconvenience. He also directed the officers to identify landslide prone areas for which mitigation DPRs should be prepared. He said that Superintending Engineers and other field officers must ensure regular inspection of roads and submit their reports to the higher authorities.

The Chief Minister also directed the field officers to review progress of works fortnightly and conduct regular monitoring of works. He said that quality work must be ensured and laxity in this respect would not be tolerated. He said that projects pertaining to NABARD and PMGSY must be completed within the stipulated time period. He said that as many as 401 projects amounting to Rs.1977 crore out of Rs. 5834 had been sanctioned under NABARD crore from the year 2018-19 onwards. He said that DPRs of 167 projects of Rs. 898 crore were under scrutiny with NABARD and 39 projects amounting to Rs. 349 crore were with the Planning Department.

Jai Ram Thakur said that 12 projects amounting to Rs. 195 crore had been sanctioned under CRIF during current financial year besides completing eight projects of Rs. 64 crore. He directed that sanctioned projects should be awarded at the earliest so that work could be started.

The Chief Minister said that sanction of 3683 roads having length of 21859 kms have been received by the Government of India till date under PMGSY. He said that PMGSY-III started in the year 2019 envisages upgradation of existing routes and other roads connecting habitations to Gramin Agriculture Markets, schools, colleges and hospitals. He said that as many as 3125 kms roads would be upgraded under this project.

Jai Ram Thakur said that 702 developmental works were going on in regard to six major line departments which include health, education, technical education, police, ayurveda and animal husbandry departments. He said that funds must be re-appropriated so that projects nearing completion could be completed at the earliest. He also directed the officers to mobilize funds for completion of various ambitious projects.

He said that Himachal Pradesh State Road Transformation Project was another ambitious project of the state government which intends to strategically transform the core road network of about 2000 kms. He said that state road network of 650 kms was proposed to be upgraded whereas 1350 kms roads were to be periodically maintained.

While expressing concern over the various ongoing NHAI projects in the State, Chief Minister said that maintenance of these roads should be given top most priority so that commuters did not face any inconvenience. He also directed the NHAI authorities to expedite work on Kiratpur- Ner Chowk-Manali and Parwanoo-Solan-Dhalli National Highways. He said that both these roads connect the major tourist destinations of the State viz. Shimla and Manali thus top most priority must be given for its timebound completion.

Principal Secretary PWD Subhashish Panda welcomed the Chief Minister and other dignitaries present in the meeting.

Engineer-in-Chief Archana Thakur made a detailed presentation of the various activities and works of the Department.