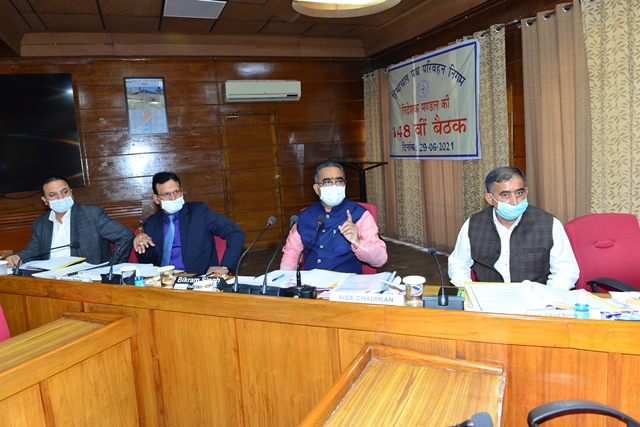 Transport Minister Bikram Singh while presiding over the Board of Directors meeting of Himachal Road Transport Corporation here today assessed the work progress of HRTC and emphasized to work with due diligence keeping in view the priority of works. He also expressed satisfaction over the progress in works being executed under HRTC and said that the Corporation was functional even during the Corona pandemic and was serving the people with commitment.

The Transport Minister said that with a view to facilitate the people, 317 inter-state buses for different States would be started from 1st July, 2021. Out of these, 15 would be Volvo buses, four deluxe and 298 ordinary buses. Covid-19 protocols would be ensured in these buses.

It was decided buses being used since nine years and having zero book value would be recommended for condemnation. To maintain the fleet strength and ensuring the safety of passengers, new buses would be purchased soon.

He said that the matter regarding construction of commercial complex-cum-parking at Una bus stand would be executed immediately. He suggested the officers to utilize the funds under smart city projects at Shimla and Dharamshala for the upgradation, modification and improvement of facilities under HRTC and transport department.

It was also decided in the meeting that relief would be given on the annual concession fees to the beneficiaries of PPP projects of Tutikandi (Shimla), Kangra, Chintpurni and Una bus stands. This relief would be applicable on the annual concession fees during the first wave of Covid-19. The civil wing of bus stand management and development authority at Nagrota Bagwan would be re-opened and technical staff would be posted in this wing.

Bikram Singh said that the bus depots at Dharampur and Jogindernagar of district Mandi would be fully operationalized at the earliest to facilitate the people of these areas. Besides this, ex-post-facto approval was accorded for bus sub-depot at Janjehli in Mandi district. The Minister said that new bus stand would be made functional at Sansarpur in district Kangra and bus stands would be constructed at Baijnath and Jasoor of Kangra district on PPP mode.

It was also decided that the workshops at Dharamshala of Kangra district and Dhalli of Shimla district would be modernized under smart city project besides modernization of bus stand Bilaspur.

Vice-Chairman of BODs of HRTC Vijay Agnihotri presented the Vote of thanks. He said that maximum loss of Corona pandemic was borne by the HRTC and tourism department.

Additional Chief Secretary Transport Ram Subhag Singh, Director Transport Anupam Kashyap and other senior officers and non-official members of Board of Directors were present on the occasion.