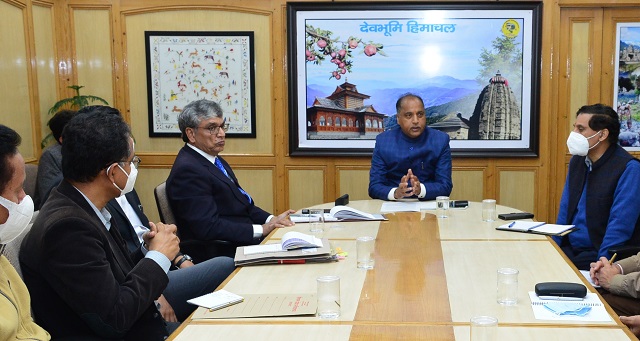 Special thrust must be laid on ensuring that the developmental projects and issues related to common people be redressed on priority so as to benefit the State and people.  This was stated by Chief Minister Jai Ram Thakur while presiding over the meeting with the Administrative Secretaries of the State Government here today.

Chief Minister said that special emphasis should be made on resolving the issues of recruitment of various categories, JOA(IT), JBT, PTI, NTT etc. which have been delayed due to one reason or another. He said that special focus must be laid on recruitments on compassionate ground as this would not only benefit the family members of the deceased but also provide employment to the needy.

Jai Ram Thakur said that all the developmental projects which have been hanging fire due to cases pending in NGT must also be expedited so that the projects could be taken in hand at the earliest. He said that projects particularly related to various departments were not only being delayed but the people were not getting the benefits of these projects in time.  He said that this was also resulting in cost escalation.

Chief Minister said that the Government would not tolerate laxity of any kind in execution of developmental projects and would not hesitate in taking stern action against the erring officials. He said that special focus must be laid on achieving the targets related to various developmental projects. He said that work on projects of PWD Department in respect of NABARD, PMGSY should be completed in time. He also asked the officers to maintain better coordination between various departments so that progress of the projects does not hamper. He also directed the officers to ensure proper maintenance of various roads in the State.

Jai Ram Thakur said that special thrust must be laid on effective implementation of Chief Minister’s announcements. He said that slackness in this regard would be viewed seriously. He also directed the administrative secretaries to identify chronic issues of their respective departments so that these could be redressed at the earliest.

Chief Secretary Ram Subhag Singh assured the Chief Minister that administrative secretaries would ensure effective implementation of the policies and programmes of the State Government.