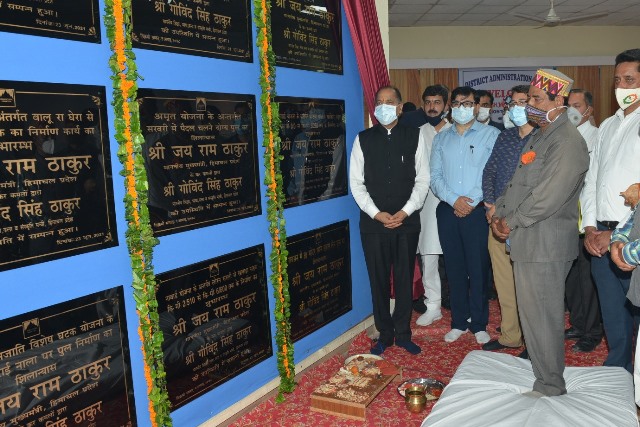 Speaking on the occasion, Chief Minister said that all the fifteen developmental projects, which was inaugurated and foundation stones were laid today by him would ensure better facilities to the people of the State as well as the tourists visiting the district. He said that the corona pandemic has forced us to dedicate these projects worth Rs. 64 crore in a simple manner with about 20 people in a Hall, otherwise this event would have been celebrated in a befitting manner. He said that all the projects worth Rs. 56 crore foundation stones of which were laid by him today must be completed within the stipulated time period. He said that the State Government had also decided to celebrate the Golden Jubilee of the Statehood in a befitting manner, but the corona pandemic has forced us to discontinue this event. He thanked the artists of Kullu and the district administration for singing the Swarnim Himachal Geet, highlighting the developmental progress of the State.

Jai Ram Thakur said that total oxygen production installed capacity was around 123.21MT of oxygen per day and current consumption of the State was around 19.21 MT of oxygen as on 20th June, 2021. He said that PSA plants had been made functional in government medical colleges of the State besides Zonal Hospital Dharamsala and DDU Shimla. He said that two PSA plants of 1000 LPM were being set up at MCH Zonal Hospital Mandi and Civil Hospital Palampur.

Education Minister Govind Singh Thakur said that the people of the Kullu district in general and of Manali Vidhan Sabha area in particular would remain grateful for the benevolence of the Chief Minister. He also thanked the Chief Minister for effectively handling the Covid-19 situation in the State. He said that Rs. 17.58 crore 80 meter span double lane bridge including approaches over river Beas at Raison in tehsil and district Kullu would go a long way in smooth flow of traffic on the Kullu-Manali-Keylong National Highway. He said that developmental projects worth Rs. 36 crore were today dedicated for the people of Manali Vidhan Sabha area today.

Former MP Maheshwar Singh while welcoming the Chief Minister thanked him for dedicating developmental projects worth crores of rupees in Kullu area.