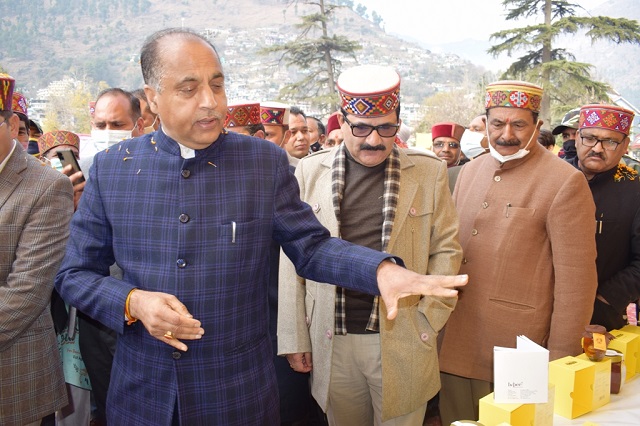 Chief Minister Jai Ram Thakur inaugurated the ‘Eat Right Mela’ at the historic Dhalpur ground in District Kullu today. While addressing the public meeting organized on this occasion, he said that Prime Minister Narendra Modi would address a massive public meeting at Mandi on 27th December, 2021 on the occasion of completion of four years of the tenure of the present State Government.

Jai Ram Thakur said the Prime Minister would lay foundation stone of 210 MW Luhri Stage-I Hydro Electric Project of Rs.1811 crore in District Shimla and Kullu and 66 MW Dhaulasiddh Hydro Power Project to be constructed with an expenditure of Rs.688 crore. He said that this is the first time in the history of the State that development projects worth Rs. 11,279 crore are being dedicated to the people of Himachal Pradesh by any Prime Minister.

While appreciating the Eat Right Mela Kullu, the Chief Minister said that a balanced diet is very important to lead a healthy life. Eating a balanced diet leads to the development of a good lifestyle. Several programs have been launched by the state government to provide nutritional diet to children and women in the state. Under Supplementary Nutrition Programme the government is providing supplementary nutrition to children in the age group of six months to six years, pregnant and lactating mothers and malnourished children through 18,925 Anganwadi centers in 78 development blocks of the state. The beneficiaries of Supplementary Nutrition Program are also being benefited under Child Nutrition Top-up Scheme of the state government. Under the nutrition campaign community based programmes are also organized on 1st and 15th of every month in Anganwadi centers of the state.

Education Minister Govind Singh Thakur welcomed the Chief Minister and said that equitable and balanced development of every section and area of the state has been ensured by the State Government during the four years tenure. He said the Eat Right Mela, people would educate people about healthy and balanced diet.