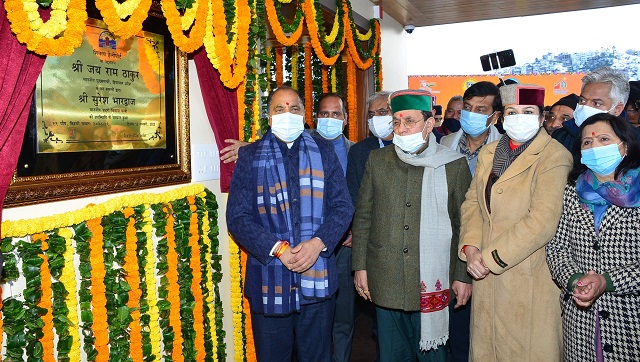 While interacting with the media, Chief Minister said that the Government of India has provided Rs. 12.13 crore for construction of this project under Himalayan Circuit of the Swadesh Darshan programme and Rs. 6 crore under UDAN-2 of Central Government. He said that this heliport would not only provide much needed relief to the high-end tourists visiting the State, besides being effectively used in case of medical emergency as this heliport was near IGMC, Shimla.

Jai Ram Thakur said that this three-storeyed heliport has all the modern facilities like reception counter, heliport manager office, ticket counter and VIP lounge etc.  He said that the heliport also has Porata Cabin facilities for arrival of passengers, parking for 50 vehicles, deck for helicopter and safety net. He said that this heliport has spread in an area of 10.3 bigha land and has been beautified by mural painting and has been fully equipped with CCTV/Surveillance system. He said that heliports were also being constructed at Baddi, Rampur and Mandi under Udaan-2 scheme of Government of India.

Chief Minister said that the State Government would soon send a proposal of construction of new heliports at Reckong Peo, Chamba, Dhalousie, Jhanjeli, Jawalaji etc. to the Ministry of Tourism and Civil Aviation which would give new fillip to tourism activities in these areas.

Jai Ram Thakur said that special emphasis was being laid on air connectivity along with four laning of National Highways connecting main tourist destinations in the State.  At present there are 64 helipads in the state and 38 new helipads were being constructed by the state government, he added.

Chief Minister said that heliports and helipads would prove beneficial in near feature from tourism, connectivity and emergency point of view.  He said that these would also facilitate during rescue operations and in transporting patients to big hospitals in emergency situation. Heliport would prove boon in enhancing tourism and economic activities in Himachal Pradesh, he added.