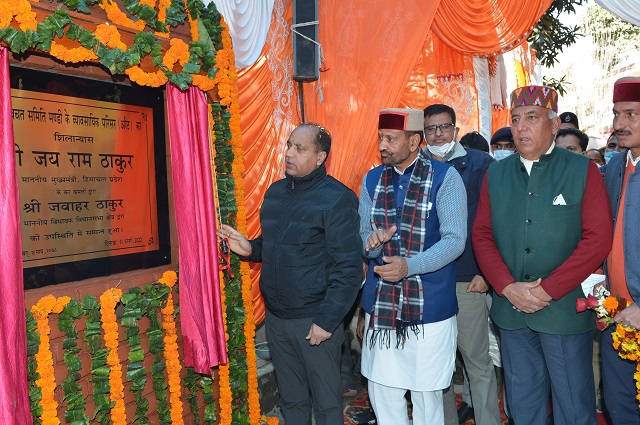 Jai Ram Thakur said that the matter would be taken up with the authorities to provide adequate compensation to the four lane affected families. He said that a survey would be conducted for the opening of Milk Chilling Plant or Milk Collection Centre of MILKFED at Aut to benefit the people of the area.

The Chief Minister said that the present State Government during the last four years has ensured balanced and alround development of Drang constituency. He said that the present four years tenure of the State Government was far better than the forty years of the previous Government as the area has witnessed unparalleled development during this period. He said that the pandemic has not only adversely affected the world economy, but has also affected the way of our living. He said that fortunately during these testing times the nation was in the secure hands of Prime Minister Narendra Modi. He said that the Party functionaries and workers also rose to the occasion and helped the needy during this hard time. The Congress leaders on the other hand were busy in politicizing even such a sensitive issue, he added. 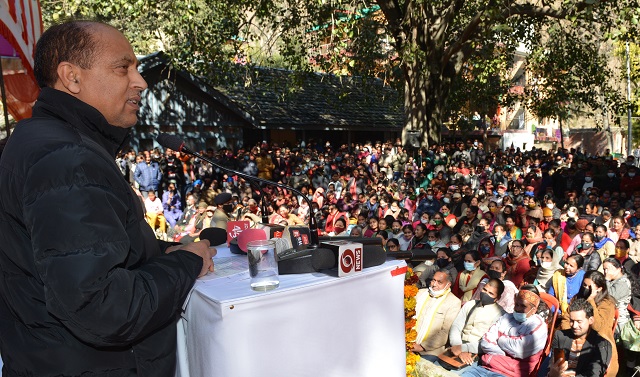 The Chief Minister also detailed various developmental schemes launched by the State Government during the last four years to ensure development of the State and welfare of every section of the society.

He also congratulated the people of the State on the auspicious occasion of Basant Panchami.

Earlier, the Chief Minister inspected progress of Hanogi bridge at Hanogi over Beas river connecting Drang and Seraj Vidhan Sabha areas of Mandi district being constructed by spending an amount of about Rs. 22 crore. He inaugurated the Public Works Division Office at Thalout which would immensely benefit the people of Balichowki, Panarsa and Pandoh area.

The Chief Minister also laid the foundation stone of Bachat Samiti Shops at Aut to be constructed by spending an amount of Rs 1.15 crore.

MLA Drang Jawahar Thakur while welcoming the Chief Minister in his home constituency thanked him for dedicating the PWD Division at Thalout which would go a long way in strengthening the road network in the area. He said that the Hanogi bridge would not only ensure better connectivity between Drang and Seraj Vidhan Sabha area but would also ensure economic activities in Thalout and Aut ares. He thanked the Chief Minister for deciding to setup another University of the State in Mandi district. He said that water supply schemes and road projects worth Rs 417 crore were being executed in the constituency during the last about four years. He also detailed developmental demands of the area. He also detailed various developmental demands of the area.

Local Panchayat President Bhushan Verma welcomed the Chief Minister and other dignitaries present on the occasion. He also detailed a few developmental demands of the area.