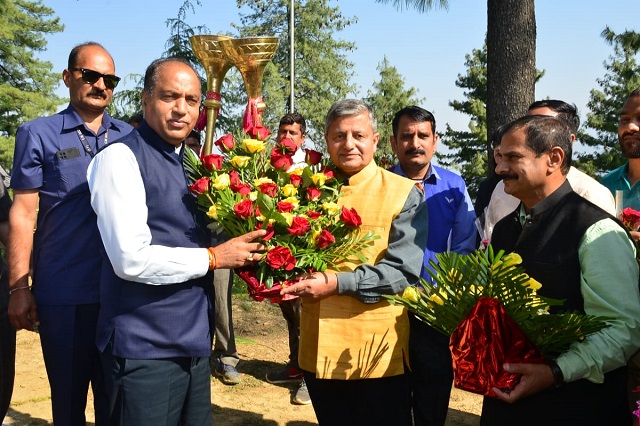 Chief Minister Jai Ram Thakur laid foundation stone of College of Horticulture and Forestry Complex at Thunag in Mandi district today to be constructed by spending an amount of about Rs. 240 crore.

Speaking on the occasion, the Chief Minister said that the College Complex would be constructed in a 52,000 square Meter area and would have Administrative Block, Library Building, Playground, Gymnasium, Auditorium, Shopping Centre and Health Centre, separate Girls and boys Hostels and also a PG Hostel. He said that there would be eight Academic Blocks, four each for College of Horticulture and College of Forestry and other related infrastructure.

Chief Minister said that in the first phase, two hostels for girls and boys, one Administrative Block and one Academic block would be constructed. He said that the work would be executed by the State Public Works Department. He directed the officers of the Department to ensure time bound completion of this ambitious project.

Jai Ram Thakur said that this College would go a long way in giving big boost to the horticulture development in the area. He was also presented a Coffee Table Book by the Vice Chancellor on the occasion.