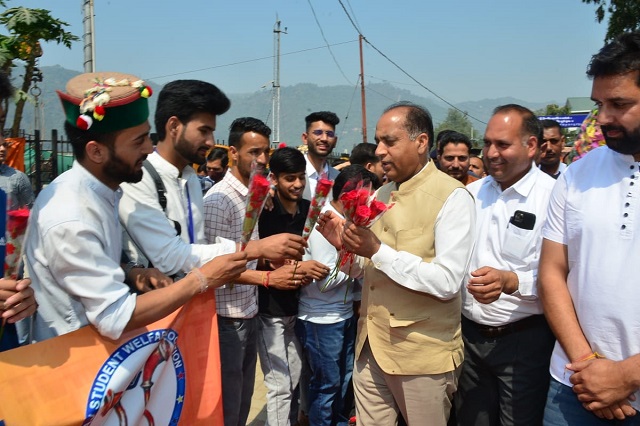 The State Government was committed to provide quality education to the students of the State at their doorsteps. This was stated by Chief Minister Jai Ram Thakur while addressing the 71st Annual Prize Distribution Function of Vallabh Government College Mandi today.

Chief Minister said that Vallabh Government College Mandi has undergone a sea change since its inception way back in 1948. He said that college during this period has not only grown in size in respect of infrastructure, but also made outstanding contribution in the field of education, sports, politics, services and other fields. He said that the alumni of this College have made their mark in various fields, which not only was an honour of them but also for their parents, teachers and whole State.

Jai Ram Thakur said that this College has been named after first Home Minister of Independent India Sardar Vallabh Bhai Patel. He said that Sardar Patel was a great statesman and visionary who played a major role in uniting 522 odd princely states in independent India. He said that he himself was alumni of this prestigious institution which have over 7200 regular students. He said that he always enjoyed visiting this College as he has several sweet memories of his college days. He said that Rs 27 crore new campus building was coming up in the campus of this college which would be dedicated during the month of August this year.

Jai Ram Thakur said that now the focus of the State Government was to strengthen infrastructure in existing education institutions so that the students could get quality education. He also nostalgically remembered his college days and shared a few interesting incidents of his college life with the gathering. He also urged the students to work hard to achieve their goal in life and at the same time enjoy their college life. He said that the college days teaches and prepare the students to meet the future challenges in their life.

Chief Minister thanked the students for playing an important role during the Covid pandemic. He said that it was due to the cooperation of the people and youth of the State, that Himachal Pradesh emerged first State in the country in administration of first and second dose of vaccine.

Chief Minister honoured the meritorious students and students excelling in different fields on the occasion.

A colorful cultural programme was also presented by the students of the college on the occasion.