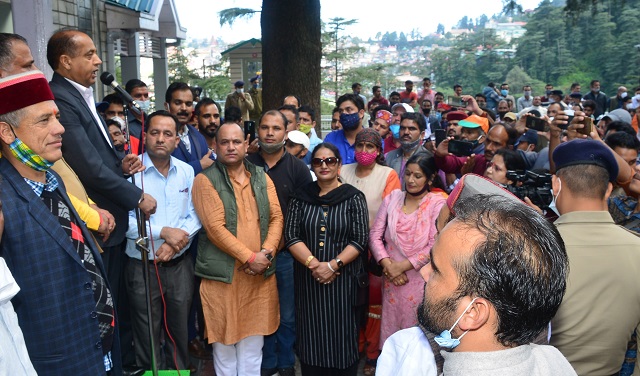 Chief Minister said that fairs and festivals represent our rich cultural heritage. The State Government is committed towards conservation of these fairs and festivals and have been taking various steps in this directions. Kullu Dussehra is not only known across the state but is known globally for its unique identity. This is a reflection of our religious belief and cultural values. He said that Covid pandemic has affected the entire world. This has impacted various activities along with the fairs and festival.

It was decided in the meeting that all deities would be invited for the Dussehra festival. All religious ceremonies would be organised traditionally but the cultural and commercial activities would not be held.

It was also decided in the meeting that Language, Art and Culture Department would provide an additional amount of Rs. 10 lakh to district administration Kullu for organising Kullu Dussehra festival.

A delegation led by Chairman, APMC Kullu and Lahaul-Spiti Amar Thakur called on Chief Minister Jai Ram Thakur at Oak Over, Shimla today. The delegation thanked the Chief Minister for various developmental works in the area.

On this occasion, Chief Minister said that the present government has ensured unprecedented development in Anni Assembly Constituency during its tenure. He said that inauguration and foundation stone laying of developmental projects worth Rs. 234 crores were performed by him during his visit to the area on 20th July, 2021. He said the state government is committed towards overall development of the state and especially this area.

On this occasion, Amar Thakur thanked the Chief Minister for dedicating various developmental projects in Anni Assembly Constituency and also urged him to visit the area.