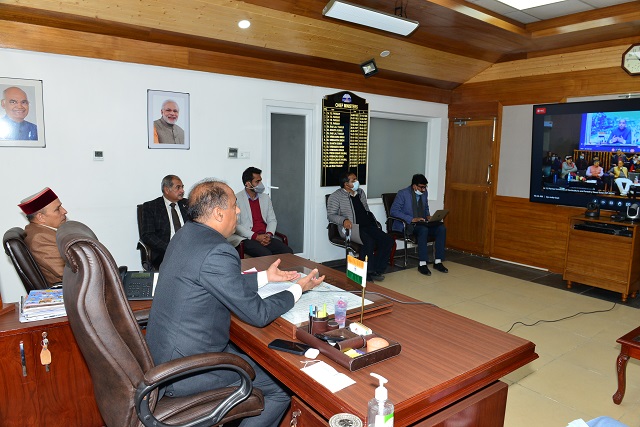 While addressing the 37th Foundation Day of Dr. Y.S. Parmar University of Horticulture and Forestry, Nauni in Solan district virtually from Shimla today, Chief Minister Jai Ram Thakur said that over the years, Himachal Pradesh has made splendid progress in the field of horticulture, as it has emerged as a potential factor to boost the agricultural economy.  He said that horticulture account for about 33 percent of agricultural production and annual business of apple alone was more than Rs. 5000 crore.  He said that role of agriculture and horticulture in employment generation, nutritional security, poverty alleviation programs is becoming increasingly important.

Jai Ram Thakur said that higher education institutions like the Dr. Y.S. Parmar University help in developing latest knowledge and technology so that it reaches the farming community. He also remembered first Chief Minister and founder of Himachal Pradesh Dr. Y.S. Parmar, who envisioned to set up a Horticulture University in the State. He said that during the covid-19 pandemic, the horticulture economy has provided much needed support to the State economy.

Chief Minister said that the University has been ranked ‘A’ grade in Atal Innovation Ranking released by the Union Ministry of Education and also ranked 11th in the ranking of Indian Council of Agricultural Research affiliated Agricultural University.  He said that since its inception, 7376 students have taken education from this University and at present 2627 students are studying in various degree programs in the University. He said that the State Government has also established a College of Horticulture and Forestry in Thunag area of Mandi district.

Jai Ram Thakur asked the University to prepare trained human resources, to find latest technologies from new research and to spread this knowledge to the farmers, so that they can increase their income and living standard. He said that the State Government has also constituted a Task Force to successfully implement the historic New Education Policy 2020. He said that a vision document was almost ready to implement this policy by the University which would benefit the students and usher in a new education revolution in the country.

He expressed hope that the progressive farmers of every district who were honoured today would share their knowledge and experience with other farmers.