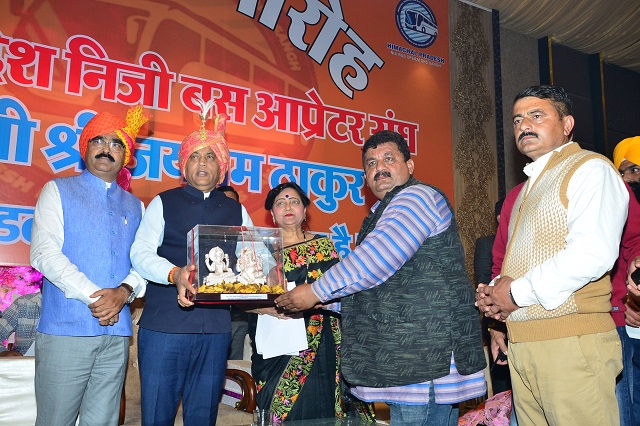 The State Government was aware of the hardships faced by the private transporters of the State, therefore has provided several concessions to them. This was stated by the Chief Minister Jai Ram Thakur while addressing the ‘Samman Samaroh’ of Himachal Pradesh Private Bus Operator’s Union at Dargola in Shahpur Vidhan Sabha area of Kangra district today.

He said that the State Government has approved Swarna Jayanti Gram Swarozgar Transport Scheme to promote low cost transport operations in rural areas.  Under this scheme, unemployed youth would be given permits for buses upto 18 seater at concessional tax rates and as many as 107 routes have been identified under this scheme and have been advertised. More such routes would be advertised soon to provide transport facilities in the rural areas, he added.

Chief Minister said that the State Government was also aware of the hardships faced by the transporters during the Covid-19 pandemic as this was the most severely affected sector during pandemic. He said that the Government provided relief by waiving 100 percent tax to all commercial vehicles during the epidemic and loan amount of Rs. 11 crores were provided to stage carriage operators to run their buses smoothly under Interest Subvention Scheme on Working Capital. He said that the State provided tax relief for twenty months, which was probably maximum in the country as about Rs.120 crore benefits were provided to the transporters. He said that the frontline workers played a crucial role in helping the State Government to tackle spread of this deadly virus and at the same time keep the economy going.

Jai Ram Thakur said that the State Government has decided that “Zero Billing” would be done for consumption of upto 60 units benefitting about 4.50 lakh consumers. He said that cheaper electricity would also be provided at the subsidized rate of rupees 1 per unit which would benefit over 7 lakh consumers consuming between 61 to 125 units. The electricity rate would be 30 paise per unit for farmers, he added.

Jai Ram Thakur said that the transporters also played a crucial role in bringing back lakhs of youths back home who were stranded in various parts of the country during covid period. He said that it was due to the able and strong leadership provided by the Prime Minister Narendra Modi that the biggest vaccination campaign of the world was successfully completed in the country. He said that it was due to this strong  leadership that the BJP has won in four out of five states of the country, results of which were declared recently.

Chief Minister announced opening of Model Career Centre in Shahpur constituency. He also announced opening of Veterinary dispensaries at Kutharna and Tatwani, upgradation of PHC Chari to CHC and Rs 1 crore for building of CHC Lang. He said that the matter for construction of indoor stadium at Shahpur would be taken up with the Government of India at the earliest.

Industries and Transport Minister Bikram Thakur said that being a hilly State, public transport was the main mode of transportation in the State. He said that Chief Minister was always considerate towards the welfare of every section of society. He said that greater stress has been laid on welfare of every section of the society and development of every area of the State in the next financial year budget presented by the Chief Minister on 4th of this month. He said that the State have a responsive and accountable administration which was the main attraction for the entrepreneurs to invest in the State. He also suggested the private bus operators to display a banner or hoarding highlighting the policies and programmes of the State Government.

Bus Operator’s Union Rajesh Prashar thanked the Chief Minister for providing much needed relief to the transporters which ensured that the private bus operators survived the testing time of pandemic. He also urged the Chief Minister to wave of cess on green tax. He also urged him to introduce single window for setting various issues of the operators.

President Bus Operator’s Confederation of India Prassana Patwardhan  thanked the Chief Minister for waving off tax from transporters for 20 months during the pandemic as compared to maximum waived off for one year in other states of the country. He also underlined the importance of public transport particularly in hilly areas like Himachal Pradesh.