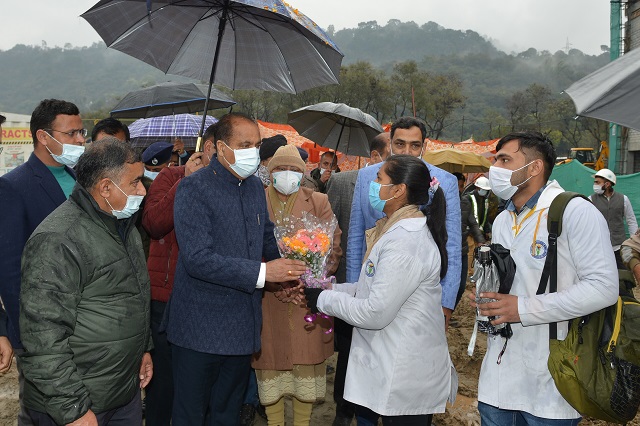 Later, while interacting with the media, Jai Ram Thakur said that this 250 bedded Medical College and Hospital was slated to be completed by August this year. He said that on completion, this Medical College would provide modern health care facilities to the people of the region.

Chief Minister said that construction work in three Medical Colleges at Nahan, Chamba and Hamirpur was going on in full swing and efforts were being made to complete all these by the month of September this year. He said that recently during his Delhi visit, he has met Union Health Minister Mansukh Mandaviya and urged him to provide additional funds for these projects so that these could be completed well in time.

Jai Ram Thakur said that the State today has six Government Medical Colleges and one Medical College in private sector. He said that apart from this, AIIMS would be dedicated to the Nation by the Prime Minister probably during the month of June this year. He said that all these medical institutions would provide world-class medical facilities to the people of the region.

A spokesperson of the state government informed here today that the two local holidays have been declared on the occasion of Maha Ashtami on 3rd October, 2022 and Govardhan Pooja on 25th October, 2022 for employees working in all government offices, Boards, Corporations and Educational Institutions in Shimla, within municipal limits.

He said that the above holidays would not be applicable to the daily waged employees and also not to be the holidays within the meaning of Section- 25 of Negotiable Instrument Act, 1881.