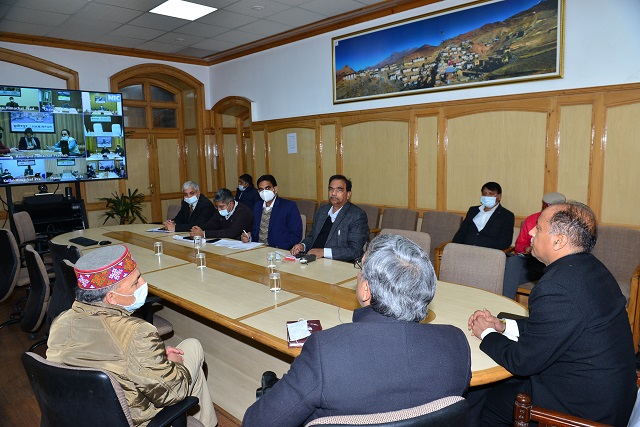 Chief Minister Jai Ram Thakur directed the officers to ensure that cent percent target of second dose of vaccination of eligible population must be achieved by 4th of December this year so that Himachal Pradesh could achieve unique distinction of cent percent vaccination of eligible population against the covid-19. He was presiding over the meeting with the senior officers of State Government to review preparedness for the celebration of vaccination against covid-19, here today.

Chief Minister said that the State Government has planned to hold a mega event at Bilaspur to celebrate this distinction which would be graced by Union Health Minister Dr. Mansukh Mandaviya and National BJP President Jagat Prakash Nadda.

Jai Ram Thakur said that out of the total 53.77 lakh eligible population till date the Government has achieved the target of vaccinating about 98 percent second dose of eligible population. He said that this was possible due to the commitment and dedication of the doctors, para medical staff and other health workers.

Jai Ram Thakur directed the officers to ensure proper arrangement of sittings and other facilities in these venues so that people do not face any inconvenience to see this mega event.