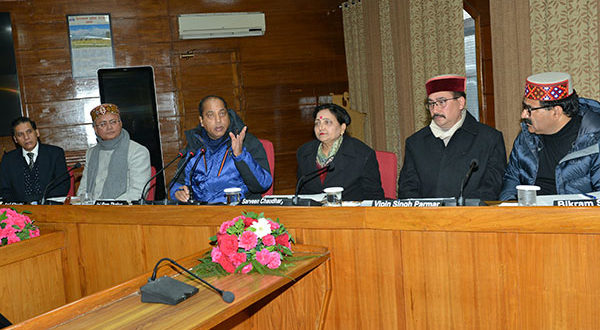 Chief Minister Jai Ram Thakur has directed officers to address the different issues taken up by the public representatives besides considering their valuable suggestions on priority. He said that Detailed Project Reports (DPRs) of various projects should be completed in time bound manner and strict action would be taken against erring officers. Chief Minister was addressing the meeting of MLAs of Kangra, Kullu and Bilaspur districts in the first session of the second day to fix the priorities of annual plan for the financial year 2020-21 here today.

Jai Ram Thakur said that forest clearances cases should be taken on priority adding that no negligence in this regard would be tolerated. He said that providing best road facilities to the people of the State was top priority and directed the PWD authorities for regular maintenance of the roads so that commuters do not face any inconvenience.  He said that the State Government was committed to provide fair, transparent and responsive administration to the people of the State by adopting zero tolerance against corruption.

Chief Minister said that the State Government was ensuring speedy and balanced development of all areas of the State with special focus on those remote and far-flung areas which have remained neglected due to one reason or other. He said that roads, irrigation and drinking water were the main focus of the MLAs priorities and concerned departments should work expeditiously on the priority schemes.

MLA Jhandutta Jeet Ram Katwal thanked the Chief Minister for announcing several game changer schemes in his area. He said that opening PWD Sub Division, Fire Station and Sub Judge Offices have proved a boon for people of the area. He also urged for providing adequate staff for various health and educational institutions in his Constituency.

MLA Bilaspur Sadar Subhash Thakur urged for providing employment to the oustees in cement plant at Bagga. He also urged for upgradation and modernisation of Bus Stand at Bilaspur. He said that the schemes being implemented under NABARD and PMGSY must be given special thrust. He also urged for developing Govind Sagar Lake from tourism point of view. He also requested for developing Luhnu Ground systematically for making it suitable for different sports. He also demanded ropeway from Bilaspur to Bandla Ki Dhar.

MLA Sri Naina Devi ji constituency Ram Lal Thakur said that several road projects in his area were delaying due to FCA, thus efforts must be made to expedite the same. He also urged for proper utilization of properties of Mid Himalayan Projects lying un-utilized.  He said that work on water supply schemes in his constituency should be expedited so that people could get potable water. He also urged for construction of Mukhyamantri Lok Bhawan at Jukhala.

MLA Nurpur Rakesh Pathania urged for strengthening Nurpur hospital by providing better emergency services in the hospital and the emergency ward should be shifted to ground floor from first floor. He also urged for construction of check dams in the constituency to raise water level.

MLA Jawali Arjun Singh said that the building of Civil Hospital Nagrota Surian and Jawali must be constructed and adequate staff and doctors be provided. He also requested to give top priority to MLA priorities schemes.

MLA from Dehra Hoshiar Singh urged for providing adequate staff in various institutions and also rationalising funding of various under implementation schemes. He said that Haripur should be developed from tourism point of view as the area has rich cultural diversity.

MLA, Jaisinghpur Ravinder Kumar said that Alampur Harsipattan road should be improved as it was the only major district road in his constituency. He urged for channelization of Beas River. He also requested for checking illegal mining in the area. He also urged for developing tourist circuit in the area. He requested for construction of building at Alampur and Panchrukhi Sub tehsils.

MLA, Nagrota Arun Kumar demanded that the limit under  NABARD may be increased from Rs 105 crore to Rs 125 crore. He said that being a Changar area, inspection vehicle for regular monitoring of ongoing projects should be deployed. He said that adequate funds be provided for maintenance of residences of doctors and other staff in Dr Rajendra Prasad Government Medical College Tanda. He also urged for developing adequate parking space in the Medical College. He also urged for maintenance of roads in his area.

MLA Kangra Pawan Kumar Kajal requested to provide adequate funds for building of Government College Matour. He said that expansion of Gaggal Airport be taken in hand soon so that bigger aircrafts could land there, but it should be ensured that people do not face any displacement due to this work.

MLA Dharamshala Vishal Nehriya urged for providing adequate specialists at Zonal Hospital Dharamshala. He said that adequate staff be provided in Municipal Corporation Dharamshala keeping in view the work load. He also urged for developing multi-storey parking in the town. He said that Bus Stand Dharamshala be shifted to some other place so as to avoid traffic congestion.

MLA Palampur Ashish Butail said that adequate funds be provided for buildings of health institutions in the area. He also urged for proper Bus Stand and parking space at Palampur. He said that new buses should be plied on new routes. He also requested to expedite work on MLA priority projects. He said that indoor stadium should be constructed at Palampur as land has already been identified and transferred for the same.

MLA Baijnath Mulkh Raj Premi urged for opening of IPH Division at Baijnath to facilitate the people of his constituency. He said that Shiv Dham be developed in Baijnath to attract more tourists in the area. He also requested for construction of multi-storeyed parking at Paprola and railway over bridge at Baijnath.

MLA Kullu Sunder Singh Thakur said that the pace of preparation of DPRs for various developmental projects should be expedited. He also showed his concern over delay in four-laning of Kiratpur-Manali highway. He also requested for upgradation of Kullu to Bijli Mahadev road keeping in view its importance from tourism point of view.  He also urged for providing sewerage facilities to area between Kullu to Bhuntar. He also demanded construction of Bijli Mahadev Ropeway. He also urged for framing policy regarding hemp cultivation for medicinal and textile purpose.

MLA Banjar Surender Singh Shourie urged for construction of bye-pass at Banjar to redress the traffic problem. He said that more sericulture centres should be established in the constituency. He also requested for opening an ITI at Banjar and connecting Bajoura with sewerage line.

MLA Ani Kishori Lal urged for providing more funds for construction and maintenance of roads in his constituency. He said that Ani area has immense potential for eco-tourism and adventure tourism, thus proper infrastructure should be created to facilitate the tourists. He also urged to provide better facilities for Shrikhand Yatra so that more tourists could be attracted.

Chief Secretary Anil Kumar Khachi assured the Chief Minister that officers will leave no stone unturned to come up to the aspirations and expectations of people of the State.

Principal Secretary Finance Prabodh Saxena welcomed the Chief Minister and other dignitaries on the occasion.

Previous: CM directs officers to restore all essential services in the state
Next: Suggestions on Budget 2020-21 invited on MyGov Portal till 17th January