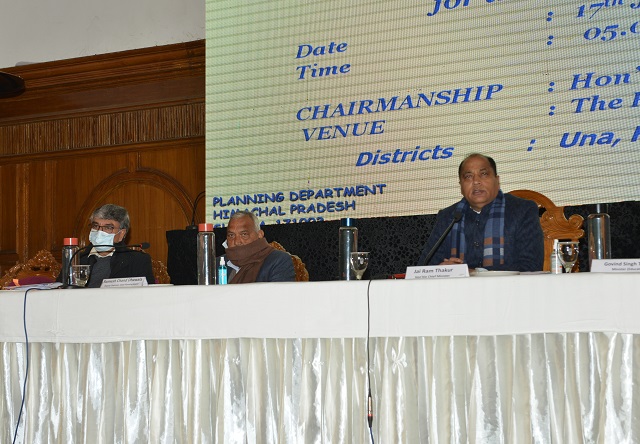 While presiding over the meeting with the MLAs for finalization of priorities for the Budget 2022-23 with the MLAs of Una, Hamirpur, Kullu and Sirmour districts in evening session here today, Chief Minister Jai Ram Thakur directed the officers to ensure that the suggestions given by the MLAs were given top most priority in the budget for the next financial year.

Jai Ram Thakur said that under the Mukhya Mantri Shagun Yojana, Rs. 31 thousand was being provided to girls belonging to BPL families at the time of their marriages. He said that the State Government would ensure that effective steps would be taken to check illegal mining and Mining Posts would be made more effective.

Chief Minister thanked all the MLAs for their valuable suggestions. He said that 30 MLAs of seven districts gave their suggestions in this meeting today. He asked the officers not to hide the ground realities. He directed the officers to give top most importance to the MLAs priorities and no compromise must be made on quality in construction work.

MLA Chintpurni Balbir Singh said that under Jal Jeevan Mission, a Jal Shakti Division was provided to the Chintpurni Vidhan Sabha area which has gone a long way in providing drinking water and irrigation facilities to the people of the area. He said that a few shops need to be acquired in Chintpurni to ensure beautification of the town. He also urged the Chief Minister to take initiatives to develop upper area of the constituency from tourism point of view. He also thanked the Chief Minister for making Amb as Notified Area Committee.

MLA Haroli Mukesh Agnihotri urged the Chief Minister for expediting the work for preparing DPRs under various projects in his constituency. He also felt the need to check illegal mining in the area. He said that bridge must be constructed to connect Chintpurni and Haroli Vidhan Sabha areas. He said that adequate funds must be provided under Shiva Project to Haroli constituency.

MLA Una Satpal Raizada said that the MLAs must be invited in functions held regarding foundation stones and inauguration of MLA priorities.

MLA Bhoranj Kamlesh Kumari said that the four years tenure of the present State Government has ensured alround development of Bhoranj Vidhan Sabha area. She said that oxygen plant should be established besides providing specialists in Bhoranj Hospital to facilitate the people of the area. She also urged the Chief Minister to open Fire Station at Bhoranj.

MLA Sujanpur Rajinder Rana said that work on construction of Town Hall at Sujanpur must be expedited and specialist doctors should be provided in Civil Hospital Sujanpur. He said that a 33KV sub-station, foundation stone of which was laid during the tenure of the pervious State Government should be taken in hand soon. He also urged the Chief Minister to open a Degree College and SDM office in Tauni Devi area of the Constituency.

MLA Hamirpur Narender Thakur said that adequate staff should be provided in hospitals of Constituency.

MLA Kullu Sunder Singh Thakur said that ropeway of Bijli Mahadev should be taken in hand soon to give boost to tourism development in the area. He said that Sharni-Peeni road should be completed soon.

MLA Banjar Surender Shourie said that work on Banjar Hospital and Ayurvedic Hospital at Bajaura must be expedited. He said that DFO wildlife must be shifted to Larji from Shamshi. He said that Shoja and Tirthan valley must be developed from tourism point of view.

MLA Ani Kishori Lal said that Ani Vidhan Sabha area has witnessed unprecedented progress during the last four years. He said that pending DPRs of roads must be prepared on priority. He thanked the CM for dedicating various schemes for the area during his recent visit to the Constituency.

MLA Nahan Dr. Rajiv Bindal said that all the announcements made by the Chief Minister must be given top most priority so that projects could be taken in hand at the earliest. He urged the Chief Minister to provide sewerage facility in Nahan town. He also felt the need to expedite construction work of buildings of Dr. Y.S. Parmar Government Medical College Nahan.

MLA Sri Renuka ji Vinay Kumar congratulated the Chief Minister for Rs. 7000 crore Renuka Dam project, foundation stone of which was laid by the Prime Minister recently. He said that social impact assessment of this project should be properly taken in hand so that the oustees of this dam do not face any difficulty in rehabilitation. He said that a pair of tiger must be brought in Renuka Zoo and two battery cars in the zoo must be repaired and if required should be replaced.

MLA Shillai Harshwardhan Chauhan said that effective governance was the need of the hour. He said that adequate staff must be provided in colleges and other educational institutions in the constituency. He said that work on Poanta-Shillai road must be expedited as this was lifeline for the people of the area. He said that issues of land acquisition and compensation must be taken up on priority. He also urged the Chief Minister to provide adequate NABARD funding for Shillai constituency. He also felt the need for fast FCA clearances so that developmental projects could be taken in hand soon.

Additional Chief Secretary Finance Prabodh Saxena, while welcoming the Chief Minister and other dignitaries, urged the MLAs to give their valuable suggestions so that they could be included in the budget.