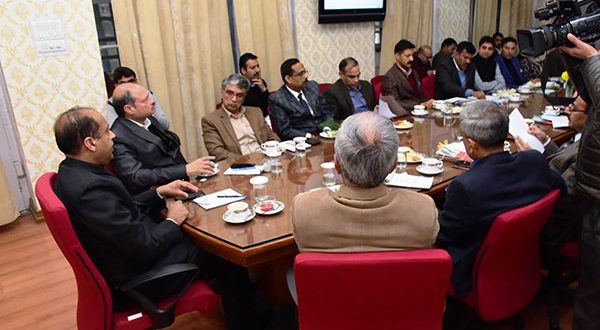 CM directs officers to speed up work on approvals of MoUs

Chief Minister Jai Ram Thakur said that all the concerned officers of the State Government should adopt pro-active approach to ensure that the MoUs signed for investment in the State shows light of the day at the earliest. The Chief Minister was presiding over the review meeting of Global Investors Meet-2019 here today.

The Chief Minister said that nodal officers must be appointed with each major business groups so that constant liaison could be maintained with the company regarding progress in granting approval to their projects. He said that apart from it, proposed mega projects should have a special dedicated officer who could ensure follow up regarding various approvals. He said that special focus should be laid on setting up of land bank comprising of both government and private land so that land could be made available to the potential entrepreneurs on demand at the earliest. He said that if required the nodal officer should also be appointed for proper coordination of land bank.

Jai Ram Thakur said that MoUs worth Rs. 92819 crore have been signed  till now with various prospective entrepreneurs out of which 610 MoUs worth Rs. 89302 crore have been uploaded on the Himpragati portal. He directed the concerned officers to upload all the MoUs signed at the earliest as Himpragati portal was the single source of MoUs status.  He said that all the new policies framed by the government should be notified by the departments so that entrepreneurs could be benefitted from the incentives being by the Government for establishing their units in the State.

The Chief Minister said that government would also set up Investment Promotion Agency to facilitate the entrepreneurs. He directed the officers to ensure that targets must be achieved to ensure that ground breaking ceremony of projects worth Rs. 10000 crore were performed on 27th  December this year on the occasion of completion of two years of the present government.

Jai Ram Thakur said special thrust should be laid on effective coordination with foreign delegates for updating them regarding various clearances of their project proposals. He said that all the concerned departments should also provide weekly status regarding environmental clearances and section 118.  He also directed departments to identify government land for the projects. He said that regular follow up of B2G meetings should be done and officers should come up with innovative ideas and suggestions.

Chief Secretary Dr. Shrikant Baldi assured the Chief Minister that the officers would work with dedication and commitment to achieve the desired results.