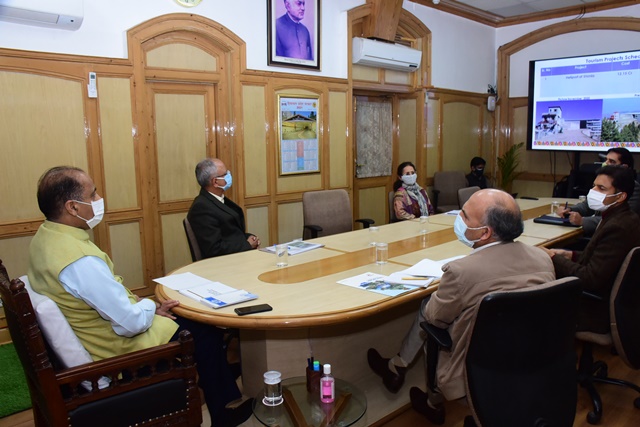 Chief Minister Jai Ram Thakur directed the officers of the Tourism and Civil Aviation Department to ensure time bound completion of on-going projects to avoid cost escalation besides providing timely facilities to the people. Chief Minister was presiding over the review meeting of Tourism and Civil Aviation Department here today.

Jai Ram Thakur said that the Cultural Centre at Janjehli in Mandi district has been completed by spending Rs. 25.75 crore and would be offered on PPP mode for operation. He said that Pre Bid meeting for this project has been slated for 3rd of next month and bids would be submitted on 25th of June. He said that heliport at Shimla was being constructed at a cost of Rs. 12.15 crore and would be completed by the end of July this year.

Chief Minister said that Kangra Haat, Dal Lake and Art and Craft Project at Bhalei Mata was nearing completion at a cost of Rs. 17 crore, Rs. 4  crore and Rs. 4 crore respectively. He said that convention centre at Kiarighat in Solan district would be completed by September this year by spending an amount of Rs. 29.90 crore. He said that Shivdham at Mandi was an ambitious project, first phase of which has been awarded to M/s Generic Engineering Construction and Projects Limited at a cost of Rs. 36.12 crore. He directed PWD authorities to expedite the work on construction of road leading to this project.

Jai Ram Thakur said that Bantony Castle Shimla would be completed by September this year by spending Rs. 25.45 crore. He directed the concerned authorities to ensure that the project is completed within stipulated period. He said that ropeway ski lift, ski resort, helipad, camping, ski slopes would be developed in Chanshal area of Shimla district on PPP mode for which last date for receiving EOI has been fixed for 19th June this year.

Chief Minister said that Rohtang tunnel has emerged as a major tourist destination after its inauguration by the Prime Minister Narendra Modi. He said that Government has proposed developing tourists facilities at South and North portals of this tunnel besides starting Vista Dome, tourists bus through the tunnel for the tourists. He said that Shishu lake would also be developed for tourism point of view.

Jai Ram Thakur said that Rs. 11.75 crore Institute of Hotel Management would be constructed at Dharamshala by upgrading the existing Food Craft Institute. He said that this would provide trained manpower to the hospitality sector. He directed the officers to ensue time-bound completion of heliports at Baddi, Rampur and Kangnidhar besides undertaking LIDAR survey of proposed Greenfield Airport in Mandi district.

Director Tourism Yunus made detailed presentation on the ongoing tourism projects in the State.

Chief Minister Jai Ram Thakur called on Governor Bandaru Dattatraya at Raj Bhavan today. He enquired about the well being of Governor and Lady Governor. Lady Governor is admitted in the Indira Gandhi Medical College and Hospital, Shimla after testing positive for Corona and now her condition is normal. 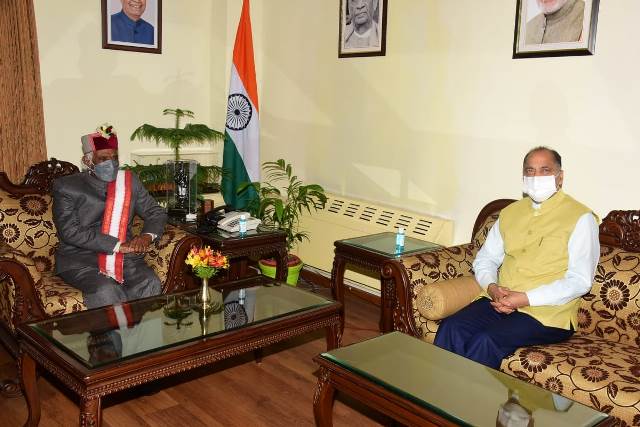 The Chief Minister apprised the Governor about the Covid-19 conditions in the State and also briefed the arrangements and facilities being provided by the State Government to the corona patients in the State. He said that he continuously reviewed the situation and increased the bed capacity for patients in the districts.