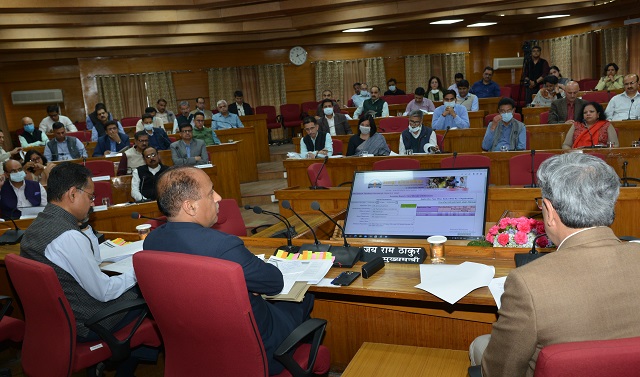 Jai Ram Thakur said that all the announcements made by him till April this year must be implemented by end of June this year so that the people could be benefitted. He said that major departments must plan atleast one mega State level event based on their welfare schemes. He said that proper planning and concept idea must be developed to organize such events. He said that beneficiaries of major schemes related to the concerned department must be invited in these State level functions.  He said that 16 such events would be organized throughout the State to acquaint the public about the welfare schemes initiated by the State Government besides felicitating the beneficiaries.

Chief Minister said that all the projects nearing completion must be completed by the end of June this year. He said that for this special campaign must be launched. He said that any laxity in execution of projects and implementing of the announcements would be viewed seriously. He said that special emphasis must be laid on ensuring quality work in developmental projects.

Jai Ram Thakur said that an effective mechanism should be developed to ensure optimum utilization of unspent money of various other departments lying. He said that this would not only ensure adequate funds for development but also give boost to the developmental process. He said that although the covid-19 pandemic has affected the pace of development, but still steps must be taken to ensure that all the announcements made by him are achieved well in time. He said that special emphasis must be laid on completion of a few prestigious projects of the State Government. He said that projects like major buildings, bridges etc. must be executed at speedy pace so that the same have impact on masses.

Principal Secretary to Chief Minister Subhasish Panda detailed out events to be organized by various departments on welfare schemes being implemented by them. He said that out of 2123 announcements made by the Chief Minister till 31st December, 2021, as many as 1576 have been implemented and work was in progress to implement the remaining.