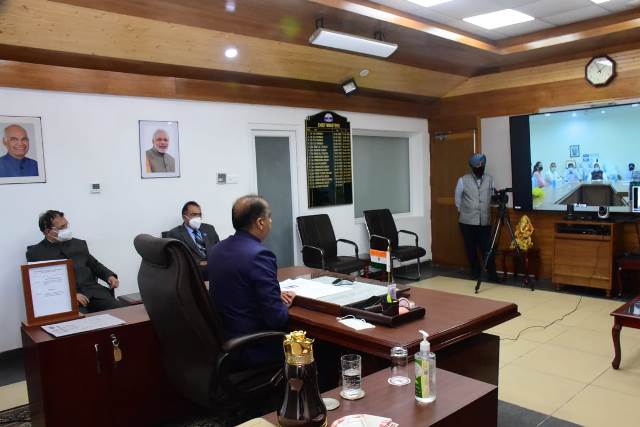 While addressing the occasion, Chief Minister thanked Captain Sonika Prashar and Captain Sanjay Prashar for this philanthropic act. He said that the contributions made by them would help the State Government in fighting the covid-19 pandemic in the State. He said that several philanthropists have come forward to help the State Government in providing better services to the society.

Chief Minister said that the Government has also increased the availability of D-Type cylinders in the State from 2500 to 6000 and also succeeded in enhancing the storage capacity of oxygen by 25 MT. He said that similarly the number of ventilators available in the State has gone from about 50 to 600. He said that efforts were being made to increase bed capacity in Una district so as to cater to the needs of the patients. He said that additional capacity of 180 beds was being created at Pandoga which would be completed within a week.

He said that as many as 1800 patients in the district were under home isolation thus better mechanism was required for ensuring speedy recovery of those patients.

Jai Ram Thakur also appreciated the contributions made by Arogya Bharati and Sewa Bharati in fighting this pandemic. He also thanked Union Minister of State for Finance and Corporate Affairs Anurag Thakur for providing helping hand to the State to effectively cope up with the situation.

Rural Development and Panchayati Raj Minister Virender Kanwar said that State has been effectively fighting the pandemic under leadership of Chief Minister Jai Ram Thakur. He urged the people to come forward to help the Government in fighting the corona virus.

Deputy Commissioner Una Raghav Sharma while welcoming the Chief Minister apprised him about the Covid-19 situation in Una district.

Dr. Hemraj of Arogya Bharati also shared his views on the occasion.