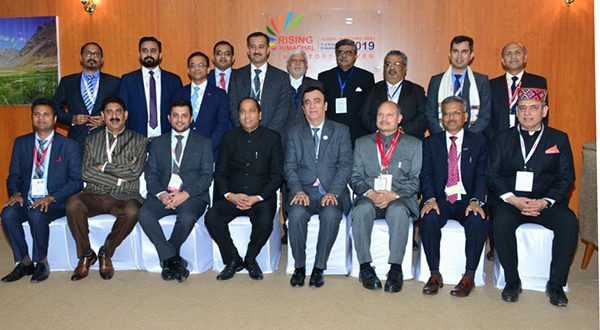 Chief Minister Jai Ram Thakur presided over the B2G meeting with the delegation of UAE led by Ambassador of UAE in India HE Ahmed AI Banna at Dharamshala today. The delegation envisaged keen interest in investment in fruit marketing and fruit and vegetable processing.

The Chief Minister said that the State Government has adopted a pro-active approach to attract investment in the State. He said that due to diverse climatic conditions, the State is known as fruit bowl of the country. This offers immense potential for setting up of fruit and food processing units and controlled atmosphere store chain in the State.

Later, the Chief Minister participated in Tourism, Wellness and Ayush session and in cultural night.

Yami Gautam, Brand Ambassador of the event, while addressing in Pahari, said that Himachal Pradesh has immense tourism potential and if fully harnessed it could transform the economy of the people. She also spoke in detail regarding natural farming and agro-tourism and its potential in the State.

Founding Director and Principal Conservation Architect, Officiating President, ICOMOS-India Gurmeet S Rai, shared her thoughts on developing religious and cultural tourism in Himachal Pradesh. She mentioned that the cultural tourism is one of the largest and fastest growing global tourism markets and Himachal has a huge potential in this field.

Director Tourism Yunus said that Himachal Pradesh was a paradise for tourism development in the country.