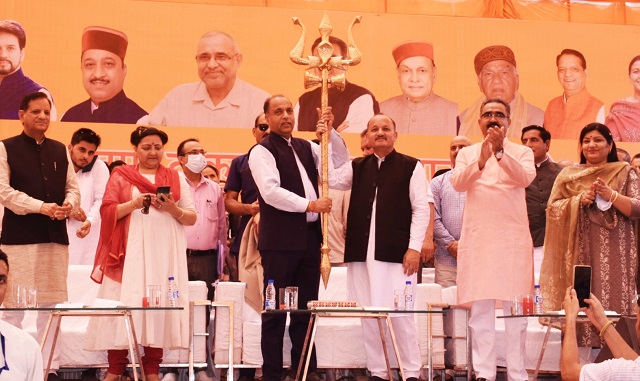 Chief Minister also announced opening of new degree college at Kotla, commencement of science classes in senior secondary schools at Bhali and Solda, commencement of commerce classes at senior secondary schools at Trilokpur and Amni, opening of new ayurveda dispensaries at Bhali and Thedu and upgradation of the Government high schools Harnot and Nanhar after the fulfillment report of standard norms. He directed the concerned departments to complete the process at the earliest.

Chief Minister said that the famous and ancient Baglamukhi temple complex at Kotla would also be developed under Nai Raahein Nai Manzilein Yojna. This would be a destination of religious tourism for tourists visiting Kangra valley. He also directed for completing the formalities with respect to construction of ECHS building which will go a long way to benefit hundreds of ex-servicemen of the area.

He also directed the forest authorities to submit a report for utilization of forest training centre in Kotla which was closed in 1998. He announced providing budget for construction of veterinary dispensary building at Pathiyar, erection of open   gymnasiums in Siyuni and Bhali panchayats and taking up the case of construction with Railways for construction of railways over head bridge.

Chief Minister said that despite the challenges of Covid-19 pandemic in the State, Government has ensured that the pace of development goes on steadily. He said credit of this goes to the active cooperation of the people, coordination of various departments and timely steps taken by the Prime Minister Narendra Modi which resulted in a massive vaccination campaign launched in the country.

Jai Ram Thakur said that workers of BJP also ensured that all possible help was provided to the needy during the time of pandemic. Lakhs of masks, sanitizers and food kits were distributed free of cost to the people in need. He said that the Congress leaders did nothing during this big challenge and were busy in politicizing this sensitive issue. He also lauded the gesture of especially members of Mahila Morcha for making and providing 50 lakh cloth-made masks and providing them to the masses. He said during the last two years, the state has succeeded to establish 50 oxygen plants. At the time of first stage of spreading the Covid virus, the state had only 30 ventilators, but presently there is availability of 1050 ventilators.

Chief Minister said the State Government has accorded top priority for health and social welfare sectors. During the regime of previous Government the age limit for availing the benefit of old age pension was 80. Present Government in its first cabinet meeting reduced it to 70 years and now it is 60 years. He also detailed the benefits given to the beneficiaries of Ujjawala, Mukhyamantri Grihini Suvidha, Himcare, Sahara and Mukhya Mantri Shagun Yojna. Appreciating the role of women in different spheres of society, he said  on the occasion of state level Himachal Day function, the government has decided to charge only 50% percent bus fare from women.