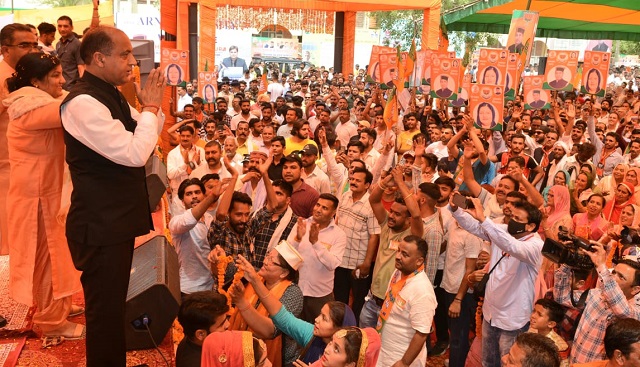 Chief Minister said that Rs. 161 crore developmental projects dedicated and foundation stones of which were laid today would go a long way in making Indora Vidhan Sabha area a most developed area of the State. He said that despite the corona pandemic, the State Government succeeded in accelerating the pace of development. He said that the credit of this goes to the Prime Minister Narendra Modi, who provided free vaccine to 135 crore people of the country. He said that it was due to the vaccination that people of the country were saved from this dreaded virus and an indigenous vaccine was prepared resulting into successful launch of biggest vaccination campaign of the world.

Jai Ram Thakur said that the opposition even did no shy away in politicising this sensitive issue and termed it as BJP vaccine. He said that the same leaders later got themselves vaccinated to save them from this virus. He said that the present State Government has given human face to development. He said that the age limit of availing social security pension without income criteria for the old was first reduced from 80 years to 70 years, which was now further reduced to 60 years in this financial year budget. He said that the Congress did nothing in last fifty years as they were busy enjoying the power. He said that not even a single scheme was started by the Congress which helped the people of the State. He said that on the other hand the BJP started HIMCARE, Grihini Suvidha Yojna, Sahara Yojna, Chief Minister Helpline-1100, Jan Manch, Mukhya Mantri Swavlamban Yojna, Shagun Yojna etc. to provide helping hand to the needy and poor.

MLA Indora Reeta Dhiman, while welcoming the Chief Minister to her home constituency said that the Indora Vidhan Sabha Area has witnessed unprecedented development during the last over four years. She said that projects worth crores of rupees were being implemented in the constituency and several institutions have been opened in the area. She said that the Kissan Mandi in the area would go a long way in providing remunerative prices to the farmers of the region. She said that sub tehsil at Thakurdwara would also benefit the people of the area. She also detailed a few developmental demands of the Indora Vidhan Sabha Area.