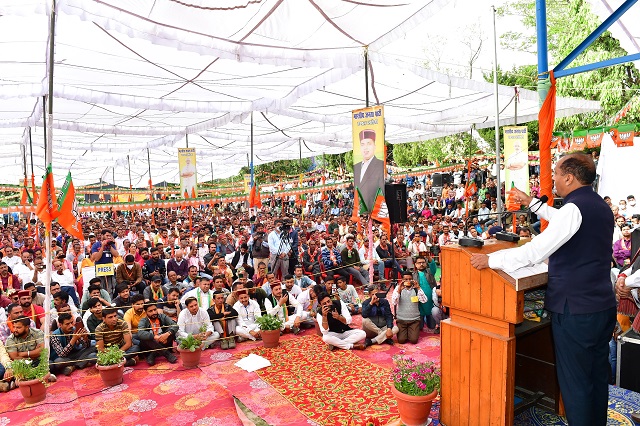 Jai Ram Thakur said that several welfare schemes being implemented in the State and several developmental projects being executed in the State were possible due to the double engine governments at the Centre and the State. He said that the Congress did nothing during all these years excepting enjoying power. He said that not even a single scheme was started by the previous Congress Government for welfare of the people. He said that the present State Government during the last about four years started several welfare schemes such as Grihini Suvidha Yojna, Himcare, Sahara Yojna, Jan Manch, Chief Minister Helpline-1100, Mukhiya Mantri Swavalamban Yojna etc. He said that all these schemes have virtually transformed the lives of the poor and downtrodden.

Chief Minister said that Rs. 304 crore works were being executed by the Jal Shakti department in the constituency, out of which over Rs 240 crore have been provided during the tenure of the present State Government.

Former MLA and Chairman APMC while welcoming the Chief Minister thanked the Chief Minister for laying foundation stone and dedicating developmental projects worth Rs 166 crore in Dalhousie Vihan Sabha Area. He said that during the earlier tour to the constituency, Chief Minister had laid foundation stone of about Rs. 65 crore water supply scheme for Dalhousie town. He said that work has been started on this ambitious water supply scheme and would go a long way in solving the water problem of this tourist town. He also detailed a few developmental demands of the area.