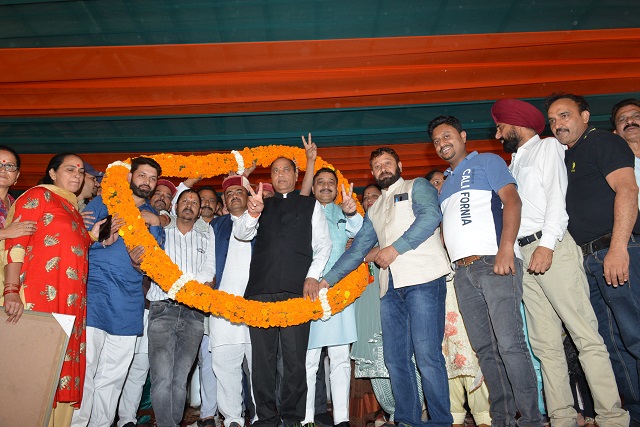 He said that Parwanoo area has also witnessed all-round development along with other parts of the State. He said that the State Government has initiated several welfare schemes for socio-economic upliftment of the weaker and vulnerable sections of the society. He said that health insurance of Rs. 5 lakh under HIMCARE which has proved a boon to the people of the State, especially the poor and downtrodden.

Jai Ram Thakur said the ‘Shagun Yojna’ has provided a helping hand to the girls of BPL families as Rs. 31,000 was being provided to them at the time of their marriage. He said that youths of the State has immensely benefited under the Mukhya Mantri Swavalamban Yojna as they were getting Rs. 1 crore for starting their own self-employment ventures. He said that for the first time in the history of the State, the government has decided that zero bill would be charged for the electricity consumers upto 125 unit power per month.  Going a step forward the State Government has also decided to provide 50 per concession of fare to women passengers in HRTC buses, he added.

Member of Parliament, Shimla Parliamentary Area and State BJP President Suresh Kashyap endorsed the developmental demands raised by the Health Minister Rajiv Saizal for the area. He said that the double engine Governments at the Centre and State has ensured that the pace of development goes uninterrupted despite the pandemic. He said that Chief Minister has announced fifty percent concession in bus fare in HTRC buses for women and also 125 unit free power to the consumers.

Health Minister Dr. Rajiv Saizal, while welcoming the Chief Minister in his home constituency, said that the area has witnessed unprecedented development during the last over four  years under the able leadership of Chief Minister Jai Ram Thakur. He said that the present State Government had successfully tackled the covid pandemic situation and Himachal Pradesh emerged as a role model for other States of the country in containing the spread of the pandemic and also in vaccination drive. He said that Rs. 104.03 crore WSS to various villages of Kasauli Constituency from Giri river, foundation stone of which was laid by the Chief Minister today on completion would go a long way in solving the water problem of the area. He said that SDM Office at Kasauli was also possible due to the benevolence of the Chief Minister. He also detailed a few developmental demands of the area.