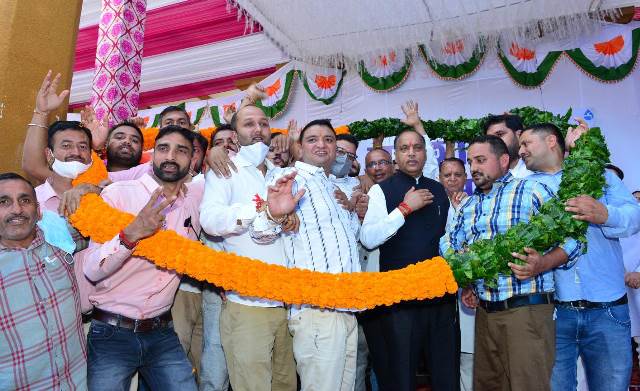 Chief Minister Jai Ram Thakur while addressing the people at Kotli in Mandi district announced opening of SDM office at Kotli soon to facilitate the people of the area. He also announced Rs. 11 lakh each for four newly created gram panchayats in the segment for construction of Panchayat Bhawans, Rs. 10 lakh for repair of Kisan Bhawan at Mandi, upgradation of police post Kotli to police station, starting of two new trades in ITI Kotli, opening of Atal Adarsh School at Kotli, Rs. five lakh each for five link roads in the area, starting science classes in Government Senior Secondary School of the area.

Chief Minister said that the three and a half years tenure of the present State Government has been full of achievements and accomplishments. He said that almost every area of the State has witnessed unparalleled development during this period. He said that despite the Corona pandemic, the State Government has ensured that the pace of development goes uninterrupted. He said that credit of this goes to the active and wholehearted support of the people of the State, which was a big source of inspiration and encouragement.

Jai Ram Thakur said that not even a single PPE kit was prepared in India, but due to the able leadership of Prime Minister Narendra Modi, today over 6 lakh PPE kits were being prepared per day in the country. He said that it was unfortunate that a few leaders were trying to politicize even this sensitive issue. He reminded the Congress leaders that despite the fact that they remained in power for over fifty years, there were only 50 ventilators in the State. He said that on the request of the State Government, the Prime Minister provided 500 ventilators to the State and today the State has about 800 ventilators. Similarly, there were only two oxygen plants in the State during the last fifty years and today as many as 28 oxygen plants were being established in the State, out of which 12 have already been established, he added.

Jai Ram Thakur also detailed a few developmental and welfare schemes initiated by the State Government during the last over three and a half years. He said that social security pension for old, Himcare, Sahara Yojna, Grihini Suvidha Yojna, Jan Manch has ensured welfare and betterment of every section of the society. He accused the former Minister and senior Congress leader from district for spreading canard against the State Government. He said that this shows his frustration and desperation for power.

Chief Minister also felicitated the people of the State on the occasion of Krishna Janmashtami.

Jal Shakti Minister Mahender Singh Thakur said that Himachal Pradesh was fortunate that today the State was being headed by Jai Ram Thakur a able and honest leader from Mandi district. He said that this has fulfilled the long pending desire and aspiration on the people of Mandi district. He said that the Jal Jeevan Mission programme of the Union Government has proved a boon to the people of the country and the State. He said that Himachal Pradesh has been ranked the best state for effective implementation of this Mission. He said that 6.04 lakh water taps have been installed in the State during the last about three years.