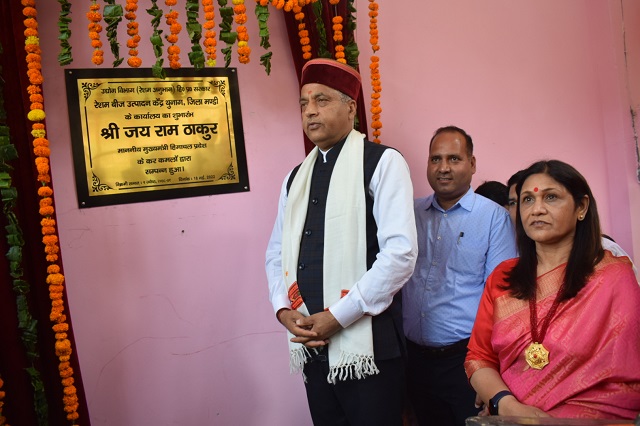 Chief Minister Jai Ram Thakur today inaugurated the second Silk Seed Production Center of the state at Thunag in Seraj Assembly Constituency in district Mandi to meet the need of silk seed production in Himachal Pradesh and to strengthen the economy of sericulture farmers. The Chief Minister also presided over the closing ceremony of Seraj Cultural Festival organised under Seraj Youth Sports and Cultural Festival.

Chief Minister said Seraj Youth Sports and Cultural Festival provided a platform to 14 thousand rural youth with participation of 1390 teams of Seraj Valley. He said that such events encourage sportsmanship and traditional sports along with playing a vital role in conservation of our rich cultural heritage.

Chief Minister also inaugurated the 84th branch of HDFC Bank in Himachal Pradesh at Thunag. He said that with the opening of this branch, door-to-door loan facility would be available to small and marginal farmers. The benefits of various government schemes are directly transferred into the account of the beneficiaries. While appreciating the efforts of the bank for distribution of 85 thousand apple saplings through Sanjeevini  organisation to 9185 farmers of 16 panchayats of Seraj Block under Plantation Project to boost the livelihood of apple producers.

Jai Ram Thakur said that the state government has ensured socio-economic upliftment and welfare of every section of the society. The people of the state have been benefited through several welfare schemes like Social Security Pension, Jan Manch, HIMCARE, Sahara Yojana, Grihini Suvidha Yojana, Shagun Yojana, Mukhya Mantri Swavlamban Yojana etc. along with the central government schemes. He said that road connectivity to every village has been ensured by the State Government. The construction of bridges and roads has also ensured socio-economic upliftment of rural areas.

Chief Minister also distributed prizes to the winners of the Seraj festival on the occasion.