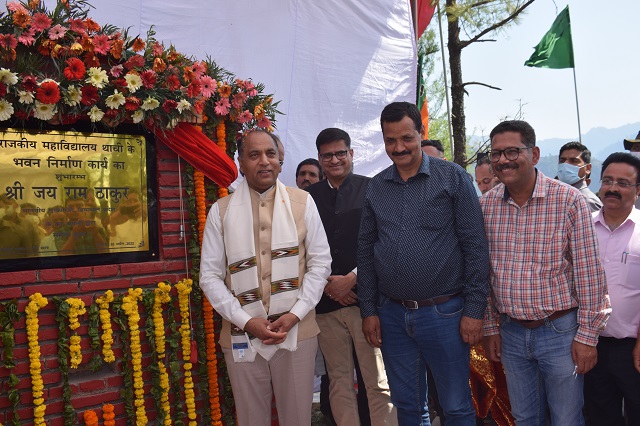 While addressing a public meeting at Thachi, Chief Minister said that people of 48 revenue villages of six Patwar circles would be benefited by the opening of sub-tehsil office. Earlier they had to go to Balichowki for various revenue works. He said that the new college building would have science, commerce and arts block, administrative block, canteen, parking facility and it would impart quality education to the students of the far-flung areas at their doorstep.

Jai Ram Thakur said that Thalot-Panjain-Thachi-Shaitadhar-Chiyuni-Lambathach road is being constructed at a cost of Rs.100 crore under Major District Road (MDR). On completion of this road, the area would be connected to the major areas and the farmers and orchardists of the area would be benefited. He said this area was being developed from a tourism point of view, which would create self-employment opportunities for the youth and new tourist destinations would also be developed.

He said that to promote religious tourism in the area, Rs. 1.30 crore have been provided for the repair and beautification of various prominent temples of Balichowki sub-division. He said that Rs. 1.15 Lakh was being provided annually to six famous temples of the region to meet their various needs.

Chief Minister said that the estimate was being prepared for the construction of a commercial complex at Thachi which would provide better marketing facilities to the local producers. He said that the metaling and tarring work of Thachi-Dibor road, Thachi-Bijhar road and Basan-Somgad road and construction of Thachi-Dadaili road, Dadali-Gagan road, Seri-Salwan road, Salot-Tandi-Patidhar etc. was in progress.

The Chief Minister announced a facility of 10 beds in Primary Health Center Thachi, Rs.12 lakh for the repair of Senior Secondary School, Thachi and starting commerce classes in Thachi College, opening of Primary School at Dhanot and construction of Salwar-Dandeli road. He also announced upgradation of Veterinary Dispensary Thachi to Veterinary Hospital, upgradation of government Middle School Palaidhar to High School and opening of Veterinary Dispensary at Basoot.