Chief Minister Jai Ram Thakur today launched Pragati Rath of the HDFC bank from here today which is a month long initiative of the bank where the van would move to different parts of Himachal to provide financial and digital literacy to the people.

Speaking on the occasion, the Chief Minister said that the Pragati Rath was a commendable endeavour of the HDFC Bank to encourage people to adopt digital banking and also impart financial literacy.  He said that this was a unique hi-tech van equipped with LED to raise awareness about best digital practices. 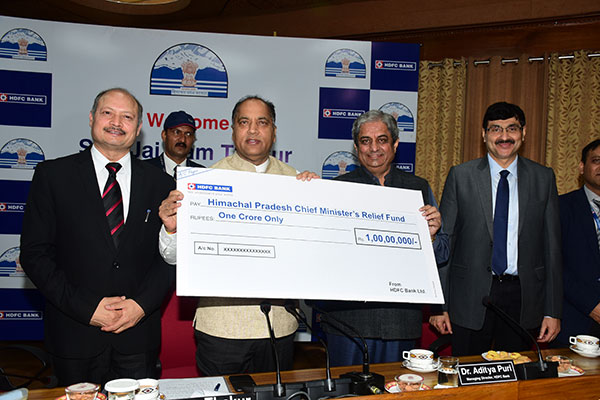 The Chief Minister also appreciated the bank for announcing to open 10 new branches in the State which would provide better banking services in the rural areas. He said that usually it was a concept of the private banks that the banks were more success only in urban areas, but the HDFC Bank has changed this myth by opening several branches in rural areas of the State.

The bank announced adopting of 15 villages of the State under Holistic Rural Development Programme and also launch of Sustainable Livelihood Initiative in the State.

The bank also announced that it would support drug de-addiction initiative in the State besides also collaborate for waste management in the State.

Jai Ram Thakur while appreciating the endeavours of the Bank for starting several activities under CSR in the State, said that these would go a long way in supplementing the government efforts in holistic development of the State besides helping those who had fallen in the trap to drug abuse to lead a normal life. 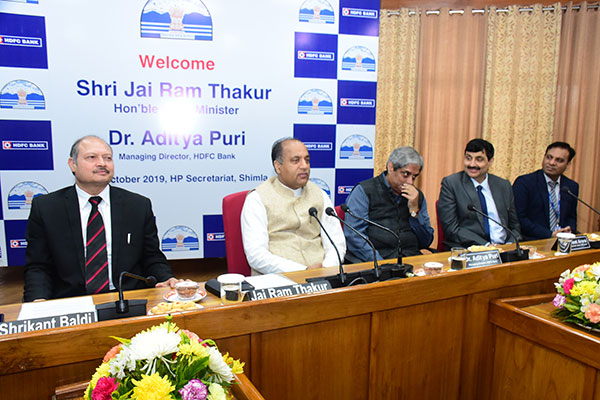 Chief Secretary Dr Shrikant Baldi said that banks play an important role in the economy of the State and urged them to give liberal and easy loan facilities to the consumers by avoiding the cumbersome procedures.  He said that it was also good step of the HDFC Bank to open 10 more branches in the State which will also give boost to the economic activities.  He said that major bank like HDFC was pivotal for the success of the proposed Global Investor Meet to be held at Dharamshala.

Managing Director HDFC Bank Dr Aditya Puri said that the bank had 67 branches and 107 ATMs in Himachal Pradesh to facilitate the consumers of the bank.