The Chief Minister said that the state government was committed for the development of rural areas as more than 90 percent of the total population lives in these areas and about 70 percent of the population was dependent on the agriculture sector for livelihood.  Despite limited financial resources and slowdown due to the Corona pandemic, the present state government has launched various new schemes to promote irrigation, agriculture, horticulture, forestry and allied sectors besides ensuring all-round and equitable development of the State.

Jai Ram Thakur said that the phase-II of the JICA aided crop diversification project would be implemented in all the 12 districts of state and would give a big boost to the socio-economic status of farmer’s families. The phase-I of the project being implemented in five districts of Mandi, Kangra, Hamirpur, Bilaspur and Una on pilot basis since 2011 has virtually transformed the economy of the farmers in these districts.

He said that the main objective of this project was to disseminate a successful model of crop diversification and increase the vegetable area in the project area from 2500 hectares to 7000 hectares by 2031.  He said that in order to fulfil the vision and commitment towards rapid development of the State, the government was mobilizing resources from all possible sources including central government, external funding agencies like JICA, World Bank and Asian Development Bank etc.  The state government considers JICA to be the most important source of financial support and partner in development of the State.  He said that there was a huge potential for cultivation of off-season vegetables in this region.  He said that the state government has created a strong network of market yards to ensure remunerative prices to the farmers, but still lot more such Mandis were required in the State so that farmers couldhave easy access for marketing their products and getting better prices. 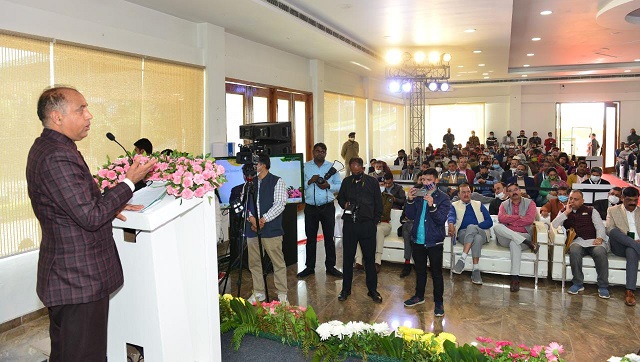 Jai Ram Thakur said that both India and Japan have developed systems of sustainable production instead of bulk production of food grains. The United Nations has also set goals for sustainable development which were to be achieved by 2030.  The government of Himachal Pradesh has institutionalized the sustainable development goals by supporting them in the budgetary and planning process and the State looks forward to meeting these goals in a record time.

The Chief Minister said that the state was grateful to the government of Japan and the government of India for leading the way for the prosperity of the farmers of this hilly state in the agricultural sector since 2007.  He also congratulated the management and staff of JICA project phase-I for their good work and thanked for their active support and guidance by sending delegations from many Asian countries to see the project.

Jai Ram Thakur said that even during the pandemic, the agriculture and allied sector played a crucial role in sustaining the economy of the State. This project also provides an opportunity to replicate the experiences of diverse farming systems in community participation and to disseminate with similar JICA supported projects in India.  He expressed happiness that Himachal Pradesh was collaborating with Japan on agricultural projects that have certainly benefited the farming communities in increasing their incomes.

He assured JICA that the state government would provide all kind of policy and resource support for the successful implementation of phase-II of the project which would prove to be a milestone in fulfilling the vision of Prime Minister Narendra Modi for the prosperity of farmers. He also suggested to document the success stories of the achievers so that other farmers could also be motivated. He also urged the farmers to go for cultivation of cash crops such as off seasonal crops so as to strengthen their economy. He also urged the scientists to take the latest technology to the fields so that the farmers could be benefitted.

The Chief Minister also inaugurated exhibition and released a few publications regarding success stories of the first phase of the project on the occasion.

A documentary film on JICA was also screened on the occasion.

Agriculture, Rural Development and Panchayati Minister Virender Kanwar said that due to the hilly topography, the area suitable for cultivation was less, thus greater stress must be laid on crop diversification to increase farmers income. He said that new phase of the HPCDP would have the JICA loan component of Rs. 807.30 crore while the State’s share would be Rs. 203.30 crore.

Guest of Honour at the dedication ceremony and chief representative of JICA-India SAITO Mitsunori said that JICA India was the largest and oldest developmental partner of Japan. He said that the Project aimed at sustainable and climate resilient agriculture development and it also had a component of technical solution He also made a presentation on project.

Chief Project Advisor Dr. J.C. Rana made a presentation regarding this ambitious project on the occasion.

Secretary Agriculture Dr. Ajay Kumar Sharma said that in the phase-II of the project, there would be 296 sub-projects for providing irrigation to convert 7,933 hectares under crop diversification while ten other sub-projects would be taken up for crop diversification regarding conversion of 500 hectare area which already have irrigation facilities. He said that the targeted increase of gross income per hectare was expected to be Rs. 2.50 lakh at the end of the project from the existing Rs. 55,000 per hectare.