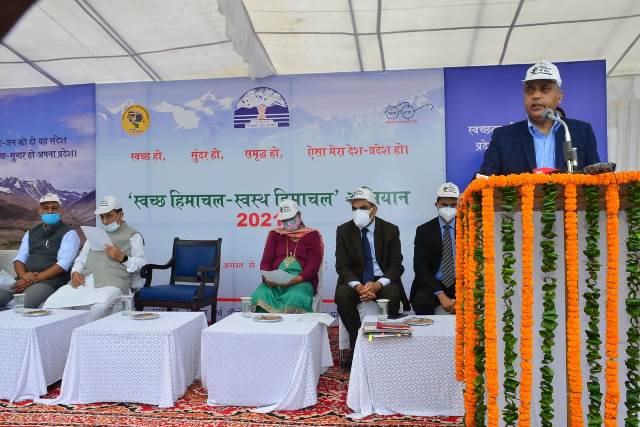 Speaking on the occasion, Chief Minister said that the nature has blessed Himachal Pradesh with clean environment and pristine natural beauty. He said that it becomes duty of all of us to maintain the same by adopting habit of cleanliness and keeping our surroundings neat and clean. He said that the State Government way back in 2009 imposed complete ban on use of plastic bags in the State. He said that in the year 2019 the State launched buy back policy for buying plastics from the consumers to protect earth from non bio-degradable wastes. He said that till date over one lakh kilogram plastics have been purchased under this scheme from the consumers.

Jai Ram Thakur said that the State Government has also banned use of plastics and thermocol cutlery as this was a major source of environment hazards. He said that the Government was promoting use of patals and plates made from papers. He said that about 100 patals and douna making machines have also been provided to the poor to promote use of these articles instead of thermocol and plastics besides helping them in earning their livelihood.

Chief Minister said that NGOs and other voluntary organizations should also come forward to check environment pollution and maintain cleanliness in the state.

Jai Ram Thakur also provided 70 plastic shredders machines to the Urban Local Bodies and municipalities of the State. He said that these machines would help the municipalities in scientific disposal of wastes.

Chief Minister also administered oath to the people regarding environment conservation on the occasion.

Urban Development Minister Suresh Bhardwaj said that the Municipalities of the State were not only ensuring door to door collection of garbage but also ensuring scientific disposal of the same. 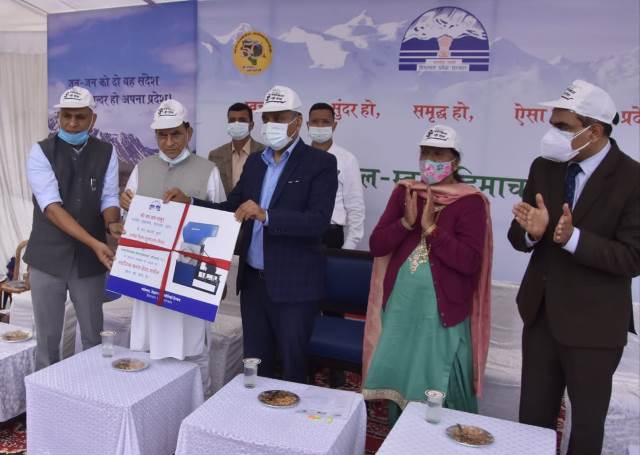 The State Government was committed for welfare of the working class and has initiated several schemes to ensure their socio economic upliftment. This was stated by Chief Minister Jai Ram Thakur while addressing a delegation led by President BJP Kisan Morcha Dr. Rakesh Sharma (Babli) who had been appointed as Chairman of Himachal Pradesh Buildings and Other Construction Workers Welfare Board at Oak over here today.

Chief Minister said that the main objective of constitution of this Board was to ensure welfare of the workers engaged in un-organized sector. He urged the workers to get them registered under Board and avail benefits of various welfare scheme. He said that Government was also concerned about the interest of the farmers and about 90 percent population of the State was directly or indirectly associated with the farming activities.

Jai Ram Thakur urged the delegation to work with greater dedication and commitment so that policies and programmes of the State Government reach the people of state.