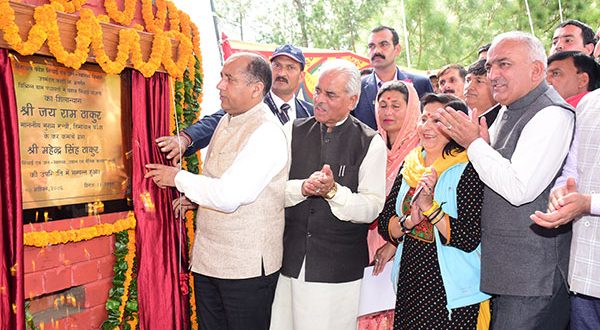 The present State Government is committed for ensuring equal and balanced development for the State besides welfare of every section of the society.

This was stated by the Chief Minister Jai Ram Thakur while addressing a public meeting at Seri Village in Dharbhog Panchayat of Kasumpti Vidhan Sabha area in Shimla district today after he laid foundation stone of Flow Irrigation Scheme under Sub Division Koti which would be completed by spending an amount of Rs. 11.56 crore. This would provide irrigation facility to eleven Panchayats of the area covering approximately 524 hectare land.

The Chief Minister thanked the people of the State for the landslide victory of the BJP candidates in the Lok Sabha Elections-2019. He said that the BJP has set a record in itself by maintaining lead in all the 68 Assembly constituencies of the State. He said that the vote share of the BJP was highest in the State in the Lok Sabha Elections and it was due to this that the Nation today has a strong leadership in form of Prime Minister Narendra Modi. He said that today India was poised to emerge as a world power under the dynamic leadership of Narendra Modi.

Jai Ram Thakur said that the Union Government took several decisions such as abolition of triple talaq and abrogation of Article 370 from Jammu and Kashmir. He said that not only this, the bold action against the terrorists such as surgical strike was also taken by the Modi Government.

Jai Ram Thakur said that the Union Government had launched Ayushmaan Bharat Yojna for the people of the country to provide insurance cover of rupees five lakh for treatment. He said that as many as 50 crore people had been covered under this scheme, which was ensuring  that the poor patients were not deprived of specialized health care facilities due to lack of money. He said that the State Government was also implementing this scheme effectively so that maximum people could be benefitted. As many as 22 lakh people of the State have been covered under the scheme.  He said that the State Government has also launched Him Care Scheme in the State to provide health insurance cover to those families who have been left out from Ayushmaan Bharat Yojna.

Former Member of Parliament Virender Kashyap thanked the Chief Minister for laying foundation stone of Flow Irrigation Scheme for the area which, on completion, would help the farmers in crop diversification, thereby strengthening their economy.

Chairperson Saksham Gudiya Board Rupa Sharma also spoke on the occasion. She thanked the Chief Minister for decreasing the age limit for availing the benefits of old age social security pension for the senior citizens from 80 years to 70 years.