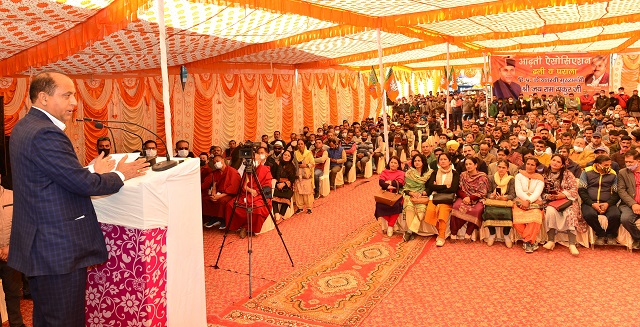 The State Government was committed to maintain the old glory of Shimla town and Shimla Smart City Project was being executed in town vigorously by initiating various works to benefit the people. This was stated by the Chief Minister Jai Ram Thakur while laying foundation stone of about Rs. 49 crore double lane Dhalli Tunnel here today.

Chief Minister said the old tunnel was constructed way back in 1852 and the new 147 meter new double lane tunnel would provide much needed relief to the commuters. He said that Shimla town has grown and expanded manifold and thus it was important that steps be taken for effective traffic management.

Jai Ram Thakur said that the present State Government was ensuring that all works under Smart City Project were executed at a fast pace. He said that the Project although was started in 2016, but it gained momentum during the tenure of the present State Government. He said that Rs. 70 crore water supply scheme for Shimla town was completed within a record time of year to ensure that water crisis of the town was solved. He said that Rs. 1813 crore new water supply project for the town was being executed, which on completion would solve the water problem of the town for next 100 years.

Urban Development Minister Suresh Bhardwaj said that the new tunnel would help in smooth plying of vehicle on this major National Highway. He said that this tunnel connects Kasumpti and Shimla Urban Vidhan Sabha areas of Shimla district. He said that several works such as widening of roads, construction of foot bridges, pedestrian paths, parking etc.  were being executed under the Smart City Project in Shimla town.

Mandal BJP President Jitender Bhotka welcomed the Chief Minister and other dignitaries present on the occasion.