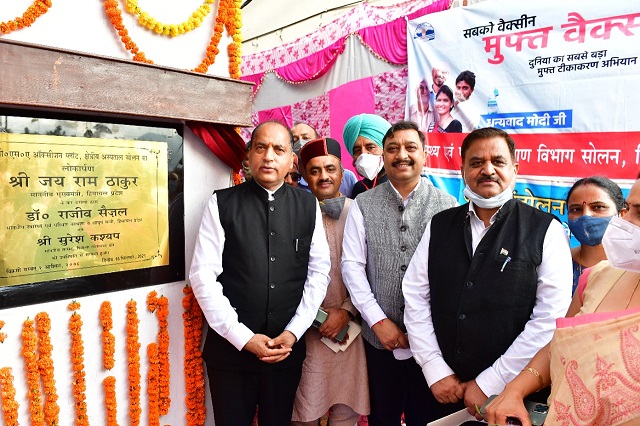 While addressing the people on the occasion, Chief Minister said that the circuit house Chambaghat which was inaugurated by him today was one of the best circuit houses in the State which had been constructed by spending an amount of Rs 8 crore. This would go a long way in providing best boarding and lodging facilities for the tourists and visitors visiting the town. He said that the State Government was committed for development of Solan as a vibrant and buzzing town of the State.

The Chief Minister said that India today was fast forging ahead on the path of progress and prosperity under the able and dynamic leadership of Prime Minister Narendra Modi. He said that the biggest vaccination campaign of the world was going in India and the nation had shown way to even the developed countries of the world in vaccination. He said that the State Government transported doctors, staff and vaccine to the people of Bara Bhangal area so as to ensure that no one was deprived of vaccination. As many as 1150 people were vaccinated in Malana area of Kullu district by launching a special drive. He urged the people of the State to give their wholehearted cooperation to make the State pioneer even in the second dose vaccination. He said that the people of the State have always reposed faith in the State Government and BJP and would not get carried away by baseless allegations of the Congress leaders.

Chief Minister announced opening of Block Education Office at Solan, staring of commerce and mathematic classes at degree college Kandaghat, staring of new development plan for Solan city, upgradation of health sub centre at Kanair to PHC, providing a digital ultrasound machine at Kandaghat hospital, opening of veterinary dispensaries at Shamti, Kurgal and Koon, upgradation of primary schools at Shamti, Dabreda and Rabon to middle schools, Rs. 10 lakh each for five link roads in the area, opening of Atal Adarsh Vidyalaya in Solan constituency, opening of HPSEB sub-division at Chail, Rs. 10 crore for the new building of regional hospital Solan foundation stone of it was laid by him today. He also announced delinking of Patwar circle Chhausa and Kot from sub-tehsil Mamlig to Kandaghat.

Health Minister Dr. Rajiv Saizal said that the Rs. 90 crore new 200 bedded hospital when completed would provide best health care facilities to the people of the district. He said that despite the lockdown and slowdown of developmental activities in the country, Chief Minister ensured that the pace go uninterrupted in the State. The Chief Minister also ensured that no one in the State was deprived of health care facilities for want of oxygen, medicines and other medical inputs. He said that most of the decisions taken by the State Government during the last about three and a half years were aimed at welfare of the poor and the downtrodden.

Member of Parliament and State BJP President Suresh Kashyap said that it was possible due to the able leadership of Chief Minister Jai Ram Thakur that Himachal Pradesh has emerged first State in the country to ensure cent-percent first dose of vaccination to the people aged above 18. He said that the interests of nation were secure under the leadership of Prime Minister Narendra Modi and interests of the State were safe in the hands of Chief Minister Jai Ram Thakur.