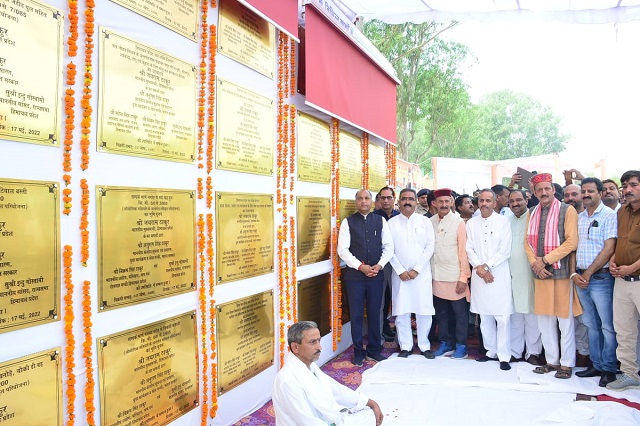 Sub Divisional Magistrate Offices at Rakkar and Kotla Behar and BDO office at Dadasiba would be opened in Jaswan Pragpur Assembly Constituency of Kangra district. These announcements were made by the Chief Minister Jai Ram Thakur while addressing a mammoth public meeting at Nakki Khad at Pragpur in Kangra district today after performing inaugurations and foundation stones of 39 developmental projects worth about Rs. 190 crore for Jaswan Pragpur Assembly Constituency of the district. He also announced upgradation of PHC Pragpur to Model PHC, creation of additional posts of doctors at Civil Hospital Garli and starting of science classes in Government Senior secondary School Bathra and commerce classes in Government Senior secondary school Kuhna.

Chief Minister said that the Prime Minister Narendra Modi successfully led the nation in fighting the covid-19 pandemic. He said that the biggest free vaccination campaign of the world was also launched in the country successfully. He said that almost all sections of the society have been benefited by the developmental policies and programmes of the Centre and State Governments. He said that several schemes of the Centre such as Kisan Samman Nidhi Yojna, Ujjawala Yojna, Ayushman Bharat etc have benefitted crores of people of the country. He said that similarly, State Schemes like Grihini Suvidha Yojna, HIMCARE, Sahara Yojna, Shagun Yojna etc have benefitted lakhs of people of the State. He said that unfortunately, the Congress leaders were not able to see these developments as they did nothing for the betterment and welfare of the people of the country during their tenures.

Jai Ram Thakur said that the present State Government during the last four and a half years has ensured that all the welfare schemes and developmental programmes reaches the person living at the lowest ebb. He said that Sahara Yojna has been proving a boon to the families having a chronically ill patient. He said that Rs. 3000 per month was being provided to such families under this scheme. He took a jibe at Congress party and said that despite remaining in power for over 50 years, the Congress did nothing for such section of the society. He said that several schemes have been started for empowerment of the women in the State. He said that Mukhya Mantri Swavlamban Yojna has made the youth of the State ‘job providers’ instead of ‘job seekers’.

Jai Ram Thakur thanked the people of the State for extending their wholehearted support during the testing time of Corona pandemic. He said that on the other hand Congress leaders did not spare its own High Command and raised bill of Rs 12 crore, claiming that the expenditure was made by the party workers to provide masks, food packages and sanitizers to the people of the State. He also ridiculed the decision of the Congress for appointing four Working Presidents in a small state like Himachal Pradesh. The Congress was compelled to do this as their several leaders were about to leave this party.

Chief Minister was also honoured by various social, political and cultural organizations on the occasion.

Industries Minister and local MLA Bikram Singh Thakur while welcoming the Chief Minister to his home constituency thanked him for dedicating developmental projects worth about Rs. 190 crore in his constituency. He thanked the Chief Minister for always being considerate towards the developmental needs of the area. He said that the State Government has started several schemes for the welfare of the people of the State. He said that the people of the State have made up their mind to ensure Mission Repeat of BJP in the State. He also appreciated the efforts of the State Government in effectively tackling the covid-19 pandemic in the State. He detailed various developmental demands of the area and also thanked the Chief Minister for dedicating Rs. 42.90 crore bridge over Swan khad under CRF, which would immensely benefit people of the area.

District BJP President Sanjeev Sharma welcomed the Chief Minister and other dignitaries present on the occasion. He also detailed developmental demands of the area.