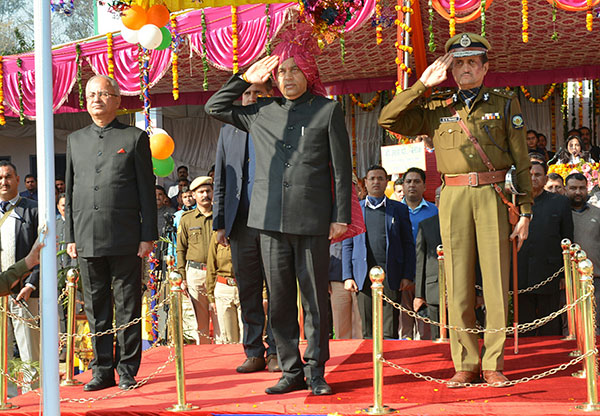 He said that the Golden jubilee year of the Statehood would be celebrated by organising 51 programmes throughout the year in different parts of the State to trace the developmental journey of the State. He urged to people to be part of this celebration.

Chief Minister hoisted the National Flag and took salute from the impressive march past by contingents of Police, Home-guards, NCC cadets, NSS Cadets, Scouts and Guides and school Children. 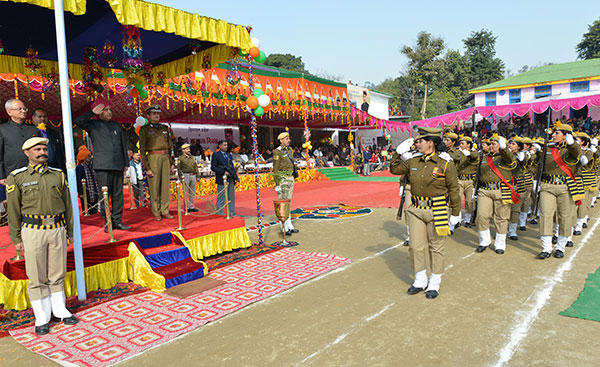 While greeting the people of the State on the auspicious occasion of Statehood Day, Chief Minister said that the State during these 49 years has witnessed unprecedented development in all spheres of development credit of which goes to the active support and cooperation of the people of the State besides able leadership provided by the successive Governments. He said that when Himachal attained Statehood, the length of roads was mere 7740 km and the literacy rate was 31.3 percent. He said that there were only 4963 educational institutions and 482 health institutions and only 2944 villages had electricity. He said that the State has witnessed unprecedented development in all sectors as today the State has a sound network of 37207 km roads and 3128 panchayats out of total 3226 have been connected with roads.

Shri Jai Ram Thakur said that present State government completed two year in the office on December 27, 2019 and significant efforts were made to provide benefits of developmental schemes to all areas and sections of the State by launching innovative and new welfare and development oriented schemes. 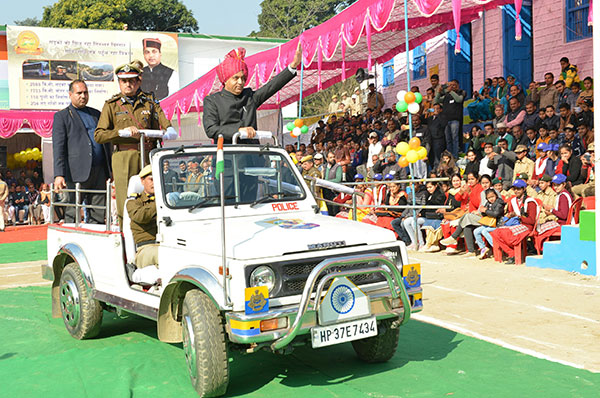 Chief Minister said that the State has received National level awards for better performance in the field of good governance, health, education, agriculture and horticulture during this period. He said that the State has been selected as the best State in the country for its achievement of sustainable development goals, which was indeed a matter of pride.

Jai Ram Thakur said that new schemes such as Jan Manch, Mukhya Mantri Seva Sankalp Helpline, Himachal Grihini Suvidha Yojana, Himcare and Sahara have yielded good results and Himachal Pradesh has emerged as the second best State in the country in overall performance due to effective implementation of welfare schemes. The State has achieved first place in the ‘State of the States’ Award in the fields of education and health, he added.

Chief Minister said that in the first meeting of the cabinet, the present State government reduced the age limit for receiving social security pension from 80 to 70 years without any income limit. With this first decision, 1.30 lakh senior citizens were benefited at that time and at present 2,63,798 senior citizens are receiving social security pension of Rs. 1500 per month, he said. 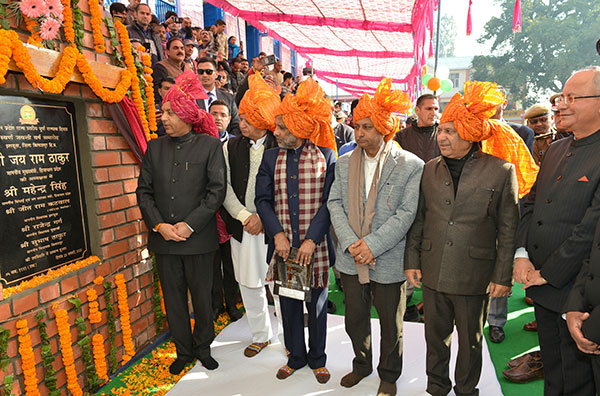 Jai Ram Thakur said that the Janmanch, which was started with the objective of establishing direct dialogue with the people of the State has yielded good results as since first Janmanch was organized on 3 June, 2018, 181 Janmanch programmes have been organized in different parts of the State. He said that more than 90 percent of these complaints were redressed on the spot and the remaining complaints were forwarded immediately to the concerned departments for further action. He said that apart from this, Mukhya Mantri Seva Sankalp Helpline-1100 has been started to bring the government closer to the public and to solve most of the problems of the citizens at their doorstep.

Chief Minister said that the country was blessed to have a strong and able leadership in form of Prime Minister Narendra Modi and it was under his visionary leadership that the country was regaining its old glory. He said Him Care scheme has been started for all the families not covered under Ayushman Bharat Yojana in the State under which free medical treatment facility of Rs. 5 lakh was being provided for five members per family under this scheme on the lines of Ayushman Bharat Scheme. He said that as many as 5.50 lakh families have been registered within a year under the scheme and more than 58 thousand patients have been treated under this scheme, on which the government has spent an amount of Rs. 54.75 crore. He said that financial assistance of Rs. 2000 per month was being provided to the eligible patients under the Sahara Yojna to the patients suffering from serious diseases like paralysis, cancer and muscular dystrophy. 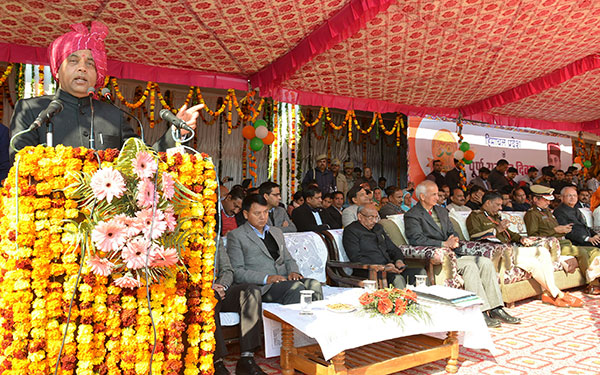 Jai Ram Thakur said that Global Investor Meet was organized on November 7-8, 2019 at Dharamshala for the first time, making this small State a platform for entrepreneurs and investors from all over the world which was inaugurated by Prime Minister Narendra Modi. He said that a result of these efforts, 703 MoUs involving investment proposals worth Rs. 96,720.88 crore have been signed so far, which is much more than the target fixed for the Meet. He said that Ground breaking ceremony of 240 projects having investment of worth Rs. 13,656 crore was held on 27 December, 2019. He said that this would open new employment opportunities to the youth of the State.

Chief Minister said that special initiatives have been taken to promote tourism in the State and a tourism policy has been formulated under which an action plan has been made to attract tourists throughout the year. He said that under the Nai Raahein-Nai Manzilein scheme, the Chanshal Valley was being developed for skiing, Janjehli for eco-tourism, Bir-Billing for paragliding and Larji and Pong Dam for water sports. He said that the ADB project of Rs. 1892 crore approved for the State would go a long way in developing Himachal Pradesh as a favourite tourist destination.

While expressing concern over the increasing cases of drug abuse particularly amongst the youth, Chief Minister said that the State Government has taken concerted steps to check this social vice. He said that for this the active participation of every citizen is required. He said that it becomes responsibility of each one of us to make Himachal Pradesh a drug free State. 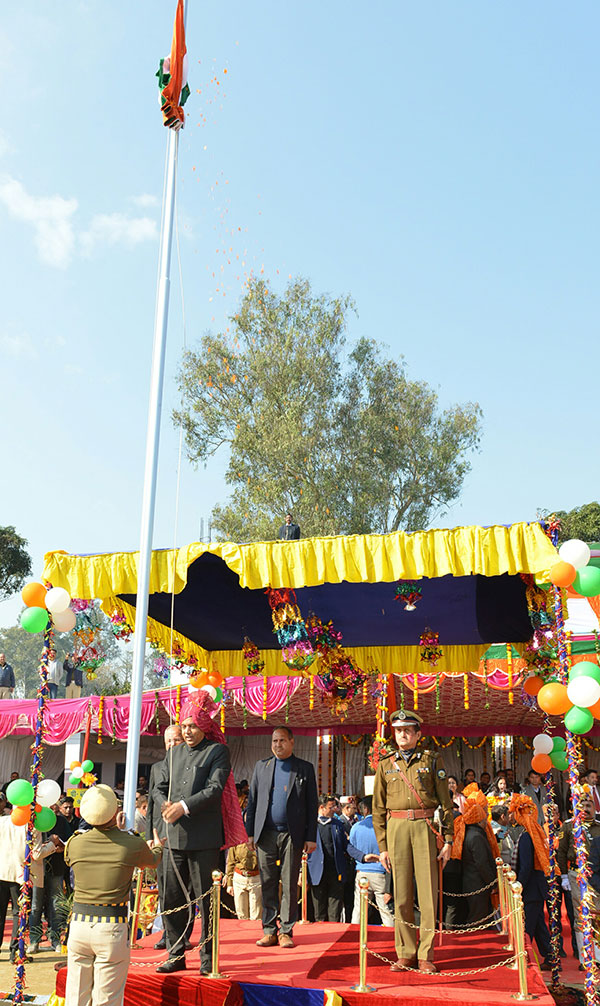 Jai Ram Thakur said that abrogation of Article 370 from Jammu and Kashmir, decision on Triple Talaq and Citizen Amendment Act, 2019 were the biggest gift of the Prime Minister to the Nation and this was possible only due to the strong leadership provided by Narendra Modi. He said that this has paved a way for One Nation, Best Nation (Ek Rashtra, Sherastha Bharat).

Referring to the development of Bilaspur district, Chief Minister said that an AIIMS was coming up at Kothipura in Bilaspur. He said that for this the people of the State were thankful to Prime Minister Narendra Modi and the then Health Minister and present National BJP President Jagat Prakash Nadda. He said that drinking water supply scheme worth about Rs. 66 crore for Bilaspur would be started soon. He said that Rs 105 crore Hydro Engineering College was coming up in Bilaspur district. He said that efforts would be made to develop Bilaspur from tourism point of view and Sri Naina Devi Ji would be soon connected by ropeway from Anandpur Sahib. He said that Rs. 37.81 crore augmentation water supply scheme once completed would benefit 19 Panchayats of Kot Dhar area. 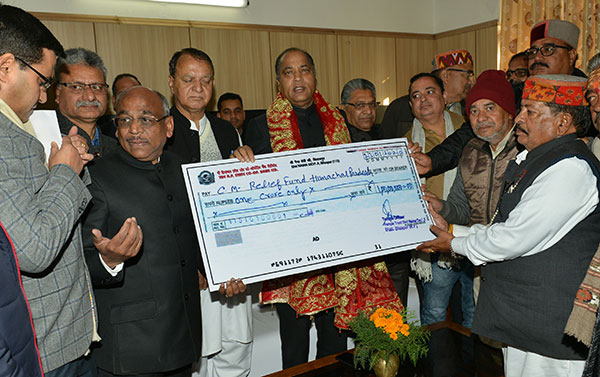 Chief Minister also honoured the participants of cultural programme and Parade Commanders on the occasion.

A colourful cultural programme was also held on the occasion.