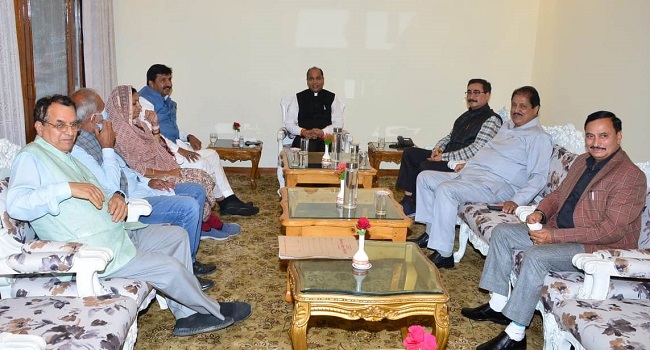 All Party meeting was held here today to review the arrangements for the proposed visit of the President of India Ram Nath Kovind from 16th of this month. Chief Minister Jai Ram Thakur presided over the meeting.

Chief Minister said that the State Government had planned to organize year long celebrations to mark the Golden Jubilee Year of the Statehood, but due to the corona pandemic it was not possible to celebrate it in large scale. He said that to commemorate this auspicious occasion, a Special Session of State Vidhan Sabha was being convened and President Ram Nath Kovind would be addressing this Session. He said that besides the sitting MLAs, all the former MLAs have been invited on this auspicious occasion. He said that this event would be held in a highly dignified and graceful manner so as to make it a memorable event.

Jai Ram Thakur also sought all possible cooperation from the leaders of all the political parties.

Parliamentary Affairs Minister Suresh Bhardwaj welcomed the Chief Minister and other dignitaries present on the occasion. He said that it was decided that a special session of the State Vidhan Sabha be convened to mark the Golden Jubilee Year of the Statehood.

Leader of Opposition Mukesh Agnihotri said that this event was above party politics and assured full cooperation from the Congress Party to the State Government.

MLA Rakesh Singha said that it was an event of the people of the State who have made immense contributions towards the development of the State.