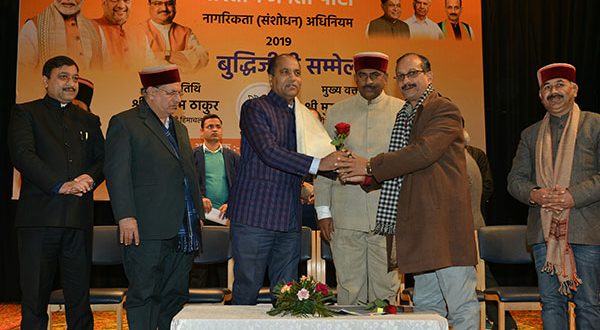 CAA an attempt to ensure unity and integrity of the country: CM

CAA an attempt to ensure unity and integrity of the country: CM

The Citizenship Amendment Act (CAA)was an attempt to ensure that the unity and integrity of the country was maintained at all cost and was no way against any minority citizens of this country. Chief Minister was addressing the ‘Budhijivi Sammelan’ organised by Shimla district BJP here today.

Jai Ram Thakur said that the Act was an initiative by our visionary Prime Minister Narendra Modi and Home Minister Amit Shah for ensuring integrity and safety of the Nation. He said that after abrogation of Section 370, this Act was another major initiative taken by the strong national leadership. He said that this has ensured that India become one nation from Kashmir to Kanyakumari in real sense with one nation and one constitution. He also thanked the Hon’ble Supreme Court for its verdict regarding Ramjanambhumi, which have paved a way for construction of a magnificent Ram Temple at Ayodhya.

Chief Minister said that after miserably failing in sabotaging this Bill in the House, the opposition leaders were causing damage to public prosperity to draw attention of the people of the country.

Chief Minister said that this Act would make it easier for non-Muslim immigrants from India’s three Muslim-majority neighbours Pakistan, Bangladesh and Afghanistan to become citizens of India. He said that the Act relaxes the requirement  from 11 years to six years, for Hindus, Sikhs, Buddhists, Jains, Parsis, and Christians from the three nations. He said that the Citizenship (Amendment) Act grants citizenship to Hindus, Christians, Sikhs, Buddhist, Jains and Parsis from Afghanistan, Pakistan and Bangladesh who had arrived in India before 31 December 2014.

Chief Minister said that this Act makes it easier to those belonging to these religions, coming in from these three countries to become Indian, even if they don’t have requisite documents.

Jai Ram Thakur said that the opposition were misguiding the people as this Act has been passed after vigorous debate in both Houses of Parliament. He said that India does not ‘judge anybody by their religion’, unlike the neighbouring countries.  He said that the people migrate due to many reasons such as economic, environmental, marriage, education, etc. as population share of Hindus in Bangladesh has fallen from 28% to 8% and similar was the case in Pakistan.

National General Secretary Muralidhar Rao said that the Citizenship (Amendment) Act does not apply to tribal areas of Tripura, Mizoram, Assam and Meghalaya because of being included in the Sixth Schedule of the Constitution. He said that the Act also does not apply to areas that fall under Inner Limit notified under the Bengal Eastern Frontier Regulation, 1873. This keeps almost entire Arunachal Pradesh, Mizoram and Nagaland out of the ambit of Act, he added. 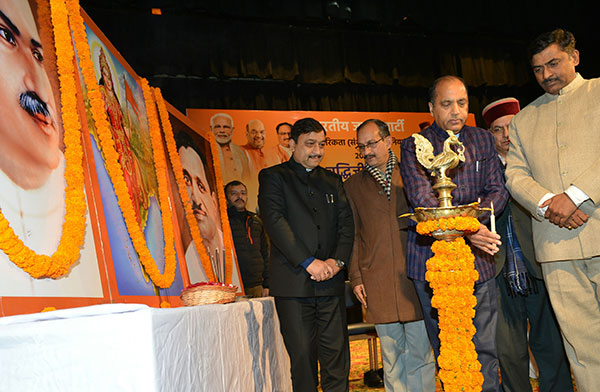 Muralidhar Rao said that Citizenship Amendment Act was a step to strengthen the unity and integrity of the country. He said that BJP was a party committed for national integration and unity. He said that BJP was the only party which was keeping a constant contact with the people of the country regarding core issues of national interest. He said that it was unfortunate that opposition leaders were trying to disrupt the normal life and causing damage to the public property on this issue, which was uncalled for. He said that the BJP was open for debate on this issue, but Congress Party was resorting undemocratic means.

Muralidhar Rao said that BJP was not against any religion or sect. He said that all minorities living in India have nothing to worry as the Government was committed for their safety and security.  He said that the Congress and other oppositions were fighting for the cause of Muslims of Pakistan, Afghanistan and Bangladesh etc. He said that the opposition was misleading the people of the country by spreading false propaganda regarding the Citizenship Amendment Act through social media.

Muralidhar Rao said that even after this Act, a Muslim from Pakistan can become Indian citizen after completing all formalities after eleven years stay in India. He said that the Act relaxes the requirement from 11 years to six years, for Hindus, Sikhs, Buddhists, Jains, Parsis, and Christians from the three nations. He said that how the same could be applicable for the Muslims of these three countries as the Muslims were in majority in these countries.

He said that a pact was signed between Jawahar Lal Nehru and Liyakat Ali in 1950 regarding safety of minorities in both Countries, but India followed in letter and spirit, but in Pakistan the rights of minorities were crushed. He said that it was under the strong leadership of Prime Minister Narendra Modi that the Act was enacted with full mandate of the people. He said that BJP party was committed for one nation and one constitution.

State BJP President Satpal Satti while welcoming the Chief Minister and keynote speaker Muralidhar Rao said that both these leaders have worked for the Party in Jammu and Kashmir in the nineties when terrorism was at its peak there. He said that the BJP has decided to organise ‘Budhijivi Sammelan’ to sensitise the people of the country regarding the Citizenship Amendment Act throughout the country at various level.