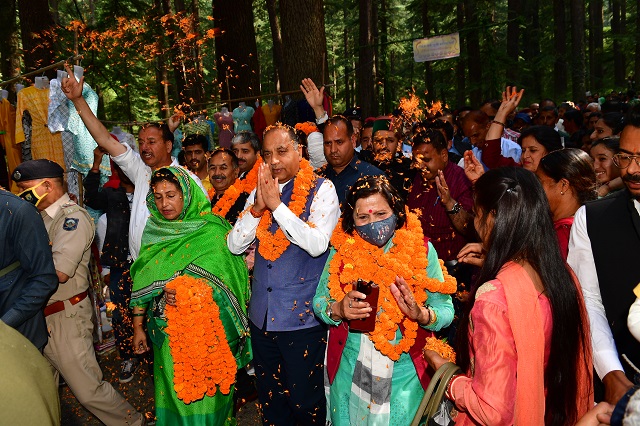 An Ayurveda dispensary would be opened at Seepur, Health Sub Centre at Kanhola  and Mashobra-Sitapur-Devthi road would be metalled and tarred to facilitate the people of the area. This was stated by the Chief Minister Jai Ram Thakur while addressing a largely attended gathering at Seepur on the occasion of closing ceremony of District Level Seepur Fair at Seepur, near Mashobra here today.

Chief Minister said that only those society progress and prosper that loves and respects it tradition and culture. He said that one must always be proud of their tradition irrespective of what one achieves in its life. He said that even our Prime Minister Narendra Modi always ensures to showcase the rich culture and tradition of the country wherever he visits.

Jai Ram Thakur said that the present State Government during last four and a half years tenure have ensured that all the policies, programmes and schemes of the State Government were aimed at welfare and upliftment of the vulnerable section of the society. He said that Rs 31,000 were being provided as Shagun to every girl belonging to BPL families of the State at the time of their marriage under the Mukhya Mantri Shagun Yojna. He said that under the Mukhya Mantri Grihini Suvidha Yojna 2.30 lakh families have been provided free gas connection, thereby making Himachal Pradesh a smoke free state.

Jai Ram Thakur also announced that the Cregnano-Shuhal road presently with Jal Shakti Vibhag would be transfer to PWD for its proper maintenance. He announced Rs 8 lakh for maintenance of Dhalli to Shirdu road and Rs 7 lakh for construction of sports ground at Gram Panchayat Padachi-Bardhi. He said that land would be transferred in the name of CHC Mashobra. He also announced Rs 21000 to the from his discretionary fund to the students of local schools for presenting cultural programme on the occasion.

Chief Minister also distributed prizes to the winners of different sports events held on the occasion.

Urban Development Minister Suresh Bhardwaj while felicitating the people of the area on this fair said that fairs and festivals since time immemorial were main mode of entertainment. He said that these festivals also provide people an opportunity of socialization. He also detailed various welfare schemes initiated by the Himachal Government for welfare of the people of the State.

Balak Ram Convener Mela Committee Seepur fair welcomed the Chief Minister and other dignitaries present on the occasion. He also detailed the rich historic significance of this District Level Fair and also urged the Chief Minister for upgrading the fair to State level.