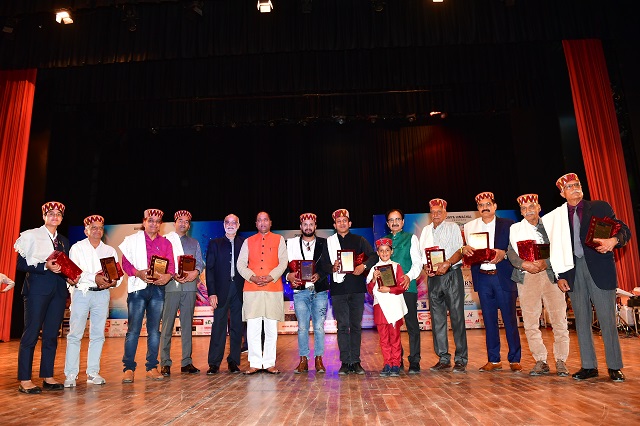 Divya Himachal  the newspaper has created a niche for itself amongst the readers of the State by its factual, fearless and unbiased reporting, besides, the newspaper was also doing a commendable work in helping the people in need, so that they could perform and achieve better in their life. This was stated by the Chief Minister Jai Ram Thakur while presiding over the ‘Himachal Excellence Awards-2021’ organized by Divya Himachal Media Group in the Auditorium of Dr Rajendra Prasad Government Medical College, Tanda, near Kangra today.

While congratulating the winners of the ‘Himachal Excellence Awards-2021’, Chief Minister said that Divya Himachal Excellence Awards aims at saluting the talents of the State who have made remarkable contribution in different fields. He said that this would go a long way in motivating the others to excel in their respective fields. He said that Divya Himachal was the first daily of the State, from the State and for the people of the State. He said that since its existence in 1997, the paper within a short span of about 25 years, has emerged as a biggest newspaper of the mountain.

Chief Minister said that the Media Group has not only confined itself to the news, but has also shared its social responsibility in a befitting manner. He said that the newspaper has also helped the State Government by highlighting its shortcomings, so that it could take corrective steps and perform better and meet the expectation of the people of the State. He also appreciated the role of the newspaper regarding educating the people during the corona pandemic.

He said that the media was functioning in a free and fair manner in the State and this would be beauty of democracy. He said that the State Government was ensuring that the Media in the State gets a congenial atmosphere to work with complete freedom.  He said that media plays a vital role in awakening of the society. He also appreciated the Group for setting up Divya Himachal Relief Fund for helping the needy.