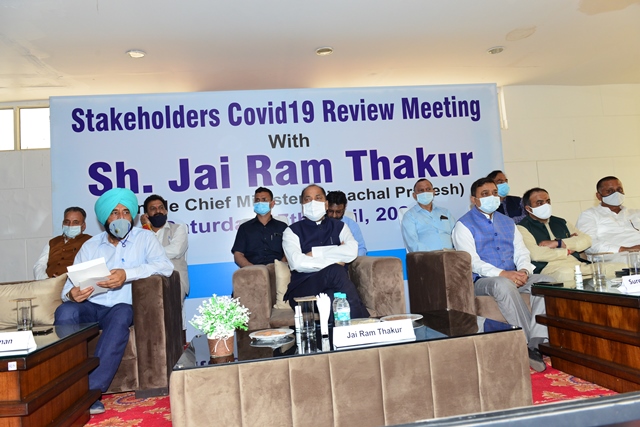 State Government is making all out efforts to check the spread of corona virus by educating the people to take preventive measures by wearing face masks and maintaining social distancing. Chief Minister Jai Ram Thakur said this while addressing the review meeting with the stakeholders at Trade Centre Baddi in Solan district today.

Chief Minister said that the nation had boldly and strongly faced the challenge of the first wave of corona pandemic and credit of this goes to the timely decisions taken by the strong and able national leadership and active co-operation extended by the people of the country. He said that now the second surge in the cases of Covid-19 pandemic was more alarming and challenging. He said that there were only 218 active Covid-19 cases left in the State on 23rd of February this year whereas today this number has crossed 7700 mark. He said that the State has reported about 200 deaths during the last about 50 days. He said that the State has crossed that 2000 figure of active cases only in twenty days which was a serious matter of concern. He said that the virus was spreading at a very fast pace thus each one of us needed to be more vigilant and careful.

Jai Ram Thakur said that when the first case of virus was detected in the State, there were only 50 ventilators but today the State had over 600 ventilators. He said that the State today was better prepared to meet the challenges posed by this virus with sufficient number of PPE kits, face masks and hand sanitizers. He said that all the stakeholders such as NGOs, Industrialists Associations, elected representatives of Panchayati Raj Institutions and Urban Local Bodies, Mahila Mandals, Yuvak Mandals played a crucial role in fighting the pandemic as the system was not activated to that extent. He said that it was the need of the hour that these stakeholders again work with similar dedication and commitment to fight this pandemic.

Jai Ram Thakur said that the State Government does not want imposition of lockdown as it adversely affects economy and causes great panic amongst the masses. He said that the main objective of his visits to different districts of the State, was to review the Covid-19 situation in the districts at the grass-root level and also requested the people to come forward to help the State Government in fighting this pandemic.

Chief Minister also interacted with the elected representatives of Panchayati Raj Institutions, Urban Local Bodies and representatives of industries on the occasion and urged them to keep better coordination between the health care workers and those in home isolation.

Health Minister Dr. Rajiv Saizal said that the uniqueness of the Indian culture and tradition was that the people fight any crisis and pandemic unitedly as our culture believes in wellbeing of all. He said that the pandemic has forced all of us to collectively fight against this virus. He said that the State has witnessed a sharp surge in the number of Covid-19 cases in the State. He said that people must wear face masks, maintain proper physical distancing, and actively come forward for vaccination. He said that over 11.87 lakh doses have been administered to the people of the State till date.

MLA Doon Paramjeet Singh Pammi welcomed the Chief Minister to his home constituency and thanked  him for being concerned about the safety of the people of the State, by taking concerted steps to check spread of this virus.

Secretary Health Amitabh Awasthi said that the State was today passing through a difficult phase of Covid-19 pandemic. He said that the Chief Minister was himself visiting every district of the State to review the Covid-19 situation at the ground level. He said that presently there were 7711 active cases in the State and the cases were increasing at a fast pace. He said that out of these 8 to 10 percent people were in hospitals and remaining were in home isolation. He said that it was the need of the hour to keep an eye on the situation and strictly follow and motivate others to follow SoPs and guidelines issued by the State Government to check spread of this virus.

Deputy Commissioner Solan K.C. Chaman while making a detailed presentation on the Covid19 situation in the district said that people must strictly follow the Covid appropriate behavior. He said that the district administration was laying stress on Tracking, Testing and Treatment.