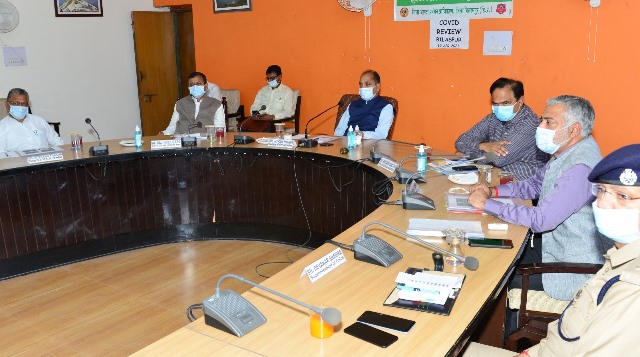 Doctors, paramedical staff and other health workers must bring a behavioural change in their attitude while treating the Covid-19 patients both in Covid Health Institutions as well as in Home isolation for better treatment of the patients.   This was stated by the Chief Minister Jai Ram Thakur while presiding over the meeting to review the Covid-19 and drought like situations in the district at Bachat Bhawan Bilaspur today.

Jai Ram Thakur urged the members of vyapar mandals to give their wholehearted support to the State Government to fight spread of this pandemic. He said that the district administration must keep watch on people coming back home from religious congregations from other States with intensity of Covid-19. He said the elected representatives of the PRIs could pay a vital role in identifying such persons coming back from such States. He said that the virus was spreading at much a pace and is more fatal as the deaths reported in the State during last about fifty days has gone up from 970 to 1177. He said that the Asha Workers must also record the other co-morbidities of the Covid-19 patients in home isolation so that better treatment of the covid-19 patients could be done.

Chief Minister said that a special campaign must be launched to ensure active participation of elected representatives of Panchayati Raj Institutions and Urban Local Bodies, NGOs, Mahila Mandals, Yuvak Mandals etc. to strengthen the mechanism of home isolation. He said that as compared to other states, Himachal Pradesh was still better due to effective covid-19 management done by the State, but still lot more needed to be done to curb this pandemic.

MLAs Subhash Thakur and J.R. Katwal also gave their valuable suggestions on the occasion, to contain the spread of pandemic in the district. They also felt the need that capacity in the district must be increased besides keeping an eye on the people visiting the high load States. They said that proper coordination between the Jal Shakti Department and HPSEB must be ensured for better supply of water.

Secretary Health Amitabh Awasthi said that the State Government was strictly following tracing, testing and treating of the covid-19 patients in the State. He directed the officers to ensure adequate stock of essential drugs, oxygen facilities and other logistics in the hospitals for better treatment of the covid patients. He also urged the elected representatives of PRIs to ensure better coordination with the family members of the covid-19 patients.