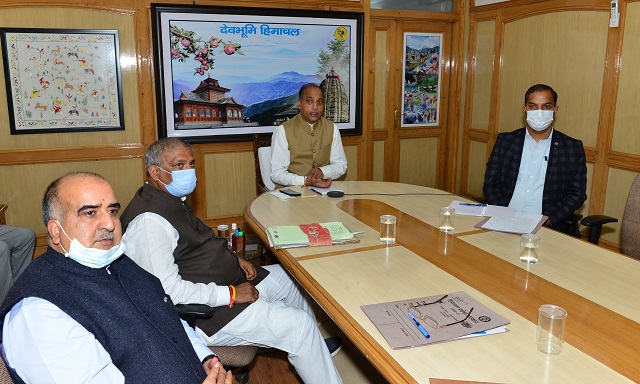 Chief Minister Jai Ram Thakur today held virtual meetings with the MLA’s and Deputy Commissioners of the state to take stock of the preparations for launch of the third and fourth phases of the PM Garib Kalyan Anna Yojana in the state on 25 September, 2021.

The Chief Minister said that the state level function would be organised at Shimla on this occasion to have interaction with the beneficiaries of this scheme, which would be presided over by Union Minister for Consumer Affairs, Food and Public Distribution Piyush Goyal. Similarly, functions would also be organised at district headquarters, sub-division, block, panchayat and fair price shop level, in which few beneficiaries would also be provided ration bags.

He said Prime Minister Narendra Modi was scheduled to preside over this function but due to committed engagements, he would not be able to join this event.

The Chief Minister said that the MLA’s would also participate in the function from one of the place in their respective Assembly constituency. However, the functions would not be organised in the blocks where model code of conduct has been enforced due to by-elections to the PRI’s. As many as 140 LED screens would be set up at prominent locations across the state to enable people to participate and see the live telecast of the State level function which would also be telecast at district, sub-division, block, panchayat and fair price shop level through virtual mode.

Jai Ram Thakur said the PM Garib Kalyan Anna Yojana was a major initiative of Prime Minister Narendra Modi in the challenging Covid-19 times to provide food security to the poor, migrant labourers and unemployed. He said that Himachal Pradesh had more than 7.18 lakh ration card holders being covered under National Food Security Act (NFSA) covering a population of above 29 lakh, who would be provided free ration bag by the end of October, 2021.

He said the main objective of organising function was to ensure maximum participation of the beneficiaries in it so that they could be made aware about this special scheme launched by the Centre last year to give relief to the NFSA families of the state. He added that 25 September was also birth anniversary of Pt. Deen Dayal Upadhayay, who gave the concept of Antodaya and it was a relevant day to carry forward his message.

The Chief Minister also directed the DC’s to take effective steps for checking spread of the Covid pandemic, especially focusing on contact tracing so that the appropriate Covid behaviour could be followed. He asked them to monitor the progress of second phase of vaccination against Covid so that the cent-percent target could be achieved by the end of November, 2021 adding that till now, 23.10 lakh people had been administered second dose of the vaccine.

State Food, Civil Supplies and Consumer Affairs Minister Rajinder Garg, who participated virtually in the meeting from Bilaspur, said that all preparations had been made for success of this event. He thanked the Prime Minister for launching this noble scheme and appreciated the steps taken by Chief Minister Jai Ram Thakur for its effective implementation in the state.

Chief Secretary Ram Subhag Singh instructed the DCs to ensure that every beneficiary of this scheme was provided ration bag by the end of October this year.

Secretary, Food and Civil Supplies C. Paulrasu conducted the proceedings of the meeting.

Director, Food and Civil Supplies KC Chaman gave a detailed presentation regarding the activities to be organised at different levels.