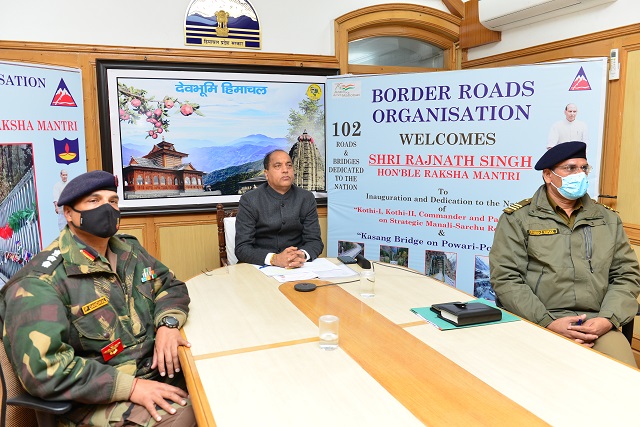 Union Defence Minister Rajnath Singh on Tuesday dedicated 27 strategically important projects in the four states and two union territories to the nation virtually from New Delhi. These projects have been constructed by the Border Roads Organization (BRO).

Chief Minister Jai Ram Thakur participated in this programme through virtual medium from Shimla and expressed his gratitude towards the Defence Minister and the central government for dedicating these projects.

He said that the country had become stronger than ever under the strong leadership of Prime Minister Narendra Modi and today the borders of the country were more secure. The connectivity to the bordering areas had increased and infrastructure was also being strengthened. He said that out of 27 projects, five bridges had been constructed in Himachal Pradesh including Kothi-1 bridge, Kothi-II bridge, Commander bridge, Patsio bridge on Manali-Sarchu road and Kashang bridge on Powari-Pooh road and these would contribute significantly to the security of the country.

Jai Ram Thakur said that these bridges on the alternate route to Leh will prove to be of great help to our soldiers posted in Jammu and Kashmir and Leh. The local people would also get the benefit of these bridges and would further strengthen the socio-economic relations between the people of Lahaul Spiti’s Keylong valley and Leh-Ladakh. Moreover, the heavy military vehicles would pass through this route conveniently and the local people would get the facility to transport their farm produce like apples, potatoes, peas, almonds and other crops to the markets. This bridge would also contribute significantly in increasing the economy of Kinnaur district, he added.

The Chief Minister congratulated the BRO for timely completion of various projects. He said that BRO has achieved a significant milestone this year by completing 102 important infrastructural projects. The BRO has played an important role in easing the lives of the people in the tribal and remote areas of Himachal Pradesh and in improving the economy of these areas.

Col. Pranay Dangwal of Project Deepak, BRO Shimla and Executive Engineer Pankaj Kumar were present along with the Chief Minister in Shimla on this occasion.