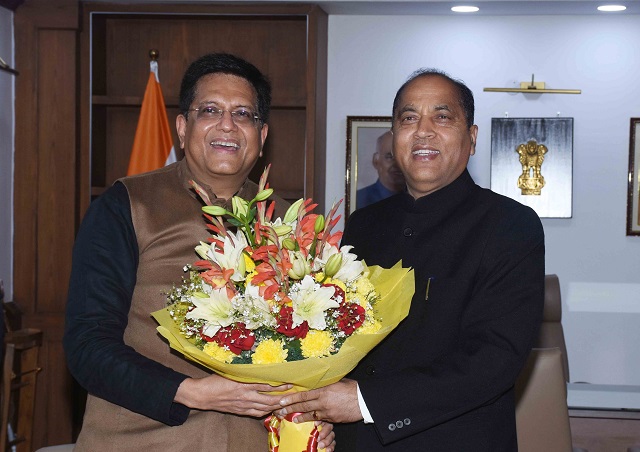 Chief Minister Jai Ram Thakur has thanked the Union Government for according approval to the proposals of about Rs. 10,620 crore of various externally aided projects in Himachal Pradesh during the last four years.

While participating in pre-budget consultation meeting on union budget 2022-23 today at Vigyan Bhawan, New Delhi presided over by the Union Finance Minister Nirmala Sitharaman, the Chief Minister said that the Finance Ministry was continuously providing generous financial assistance to the state. He said that the interest free loan of Rs. 400 crore was sanctioned for the development of infrastructure in the state during this financial year and an additional Rs. 600 crore may be provided in the form of special assistance.

Raising the issue of import duty on apples, Jai Ram Thakur emphasized on the need to increase the same from 50 percent to 100 percent to protect Himachali Apple and the livelihood of 2.5 lakh families. He said that the apple was the main horticultural crop of the state which was also the primary source of the livelihood of large population. However, due to a large influx of the imported apples in the national market, prices of the Himachal Apple had fallen sharply, leading to revenue losses of the horticulturists of the state. Therefore import duty should be increased and apple crop should be excluded from the list of fruits and other commodities brought under Open General Licence (OGL).

The Chief Minister said that the Airport Authority of India (AAI) had found the site suitable for construction of Green Field Airport in Mandi district and had also accorded its final technical go-ahead. Therefore, this project may be included in the upcoming Union budget. He demanded to declare the proposed airport as a project of national importance and said that the airport was of strategic importance, as it was in close proximity with Leh. The estimated cost for the construction of the airport is about Rs. 300 crore.

Jai Ram Thalur said that the modes of rail and air connectivity were very limited in the state and three existing airports of Shimla, Kullu and Kangra have small runways making them suitable only for operating small planes and therefore Mandi Airport was the need of the hour.

He demanded the extension of Goods and Services Tax (GST) compensation facility for the next three years. He said that Himachal Pradesh was a hilly state having tough topographical conditions. The state was receiving GST compensation and Revenue Deficit Grant (RDG) as a part of the central assistance and out of this GST compensation is effective only till June 2022. Moreover RDG will also be reduced in the coming years as per the recommendations of the 15th Finance commission, which will adversely affect the finances of the State Government. Therefore the GST compensation facility should continue, he said.

Jai Ram Thakur also requested the Union Finance Minister to provide a special grant for the maintenance and repair of the roads and bridges under the Pradhan Mantri Gram Sadak Yojana. He said that during this monsoon season, road infrastructure had been heavily damaged due to rains, floods, cloudburst, landslides in the state and the total loss was about Rs. 1100 crore. The assistance provided for the disaster management under SDRF was not sufficient as these funds were also being allocated for combating Covid-19 pandemic.

The Chief Minister demanded to continue further the Ways and Means Advances limit to compensate for the decrease in revenues of the state due to Covid-19, as this will help the state in continuing its development activities.