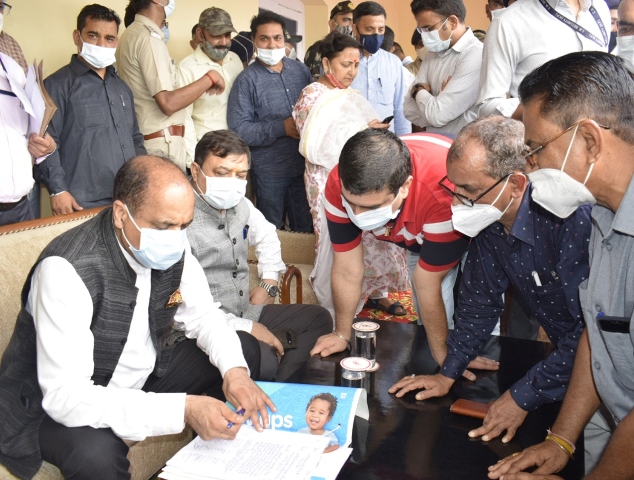 Chief Minister Jai Ram Thakur has urged the people of the State to participate in the vaccination drive against Covid-19 so that the spread of this pandemic could be checked against the third possible wave. He said that the State Government has launched the vaccination campaign at a large scale and Himachal Pradesh was amongst the leading States in this campaign.

Chief Minister was speaking while listening to the public grievances at Kangra Rest House today. He said that the State Government was fully geared up to handle the situation and all arrangements have been made to tackle the third possible wave of this pandemic effectively. He said that effective steps were being taken to strengthen health services in Dr. Rajendra Prasad Government Medical College Tanda and other all major health institutions of the State.

He said that Mukhyamantri Sewa Sankalp Helpline-1100 was proving very helpful in speedy redressal of the public grievances. So far about 2.48 lakh complaints have been received through this Helpline and most of them have been redressed. He said that Janmanch was also an important initiative of the State Government for redressal of public grievances. However due to Covid-19 it was not being organized since past few months. It would be resumed as soon as the situation normalises because this was an effective medium to reach out to the masses and address their complaints and problems on the spot.