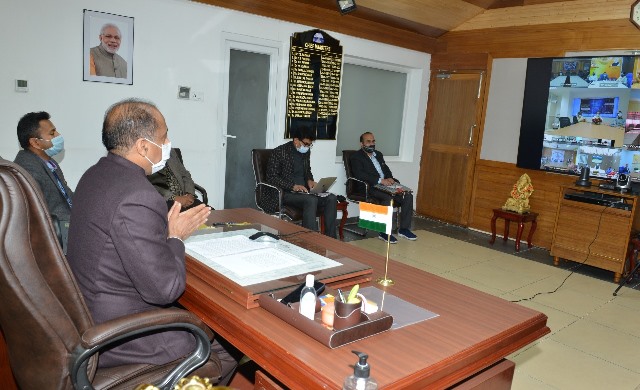 Chief Minister Jai Ram Thakur while addressing the elected representatives of Panchayati Raj Institutions of the State on the occasion of National Panchayati Raj Day, 2021 virtually from Shimla today urged them to give their wholehearted support to the State Government to check spread of the corona virus and also help the people in home isolation in their respective panchayats, besides motivating the people to go for Covid vaccination.

Chief Minister said that the situation was quite alarming, but the people need not to worry as the State Government has made all possible arrangements to meet out any eventuality. He said that there were adequate beds in the State and the State also have ample provision of oxygen. He urged the elected representatives of the PRIs to motivate the people to strictly follow the SOPs and guidelines laid by the State Government from time to time to check spread of this virus. He also urged the people of the State coming back to the State from other parts of the country to remain home quarantined at their homes for atleast a week and voluntarily go for Covid test if they have any symptoms. He urged the elected representatives of the PRIs to visit the homes of the people coming from other States and motivate and advise them to remain under home quarantine and also generate awareness regarding ensuring covid appropriate behaviour.

Chief Minister said that the 73rd amendment in the constitution was made in 1992 to empower the Panchayats and thereby strengthening the PRIs in the country. He said that the Nation was forging ahead on the path of progress and prosperity under the able leadership of the Prime Minister Narendra Modi.

Chief Minister also virtually inaugurated three Telemedicine Centers at Thana Kalan in Una district, Thunag in Mandi district and Awah Devi at Hamirpur district. He said that the State Government was committed to provide specialized services to the people even in the remotest part of the State. He said that the Telemedicine Centres would go a long way in helping the people of these areas in getting medical opinions of best medical specialists of the region.

Union Minister of State for Finance and Corporate Affairs Anurag Thakur said that the telemedicine services would help the people of the remote areas in getting specialized health care services at their door steps.  He said that the telemedicine service was the best example of effective use of technology to provide people living in far-flung and remote areas of the State.

Director PGI, Chandigarh Dr Jagat Ram said that the telemedicine service has proved a boon to the people at the time of Corona pandemic.

Coordinator Tata Health Care Ram Dev made a presentation on the occasion regarding the telemedicine service.