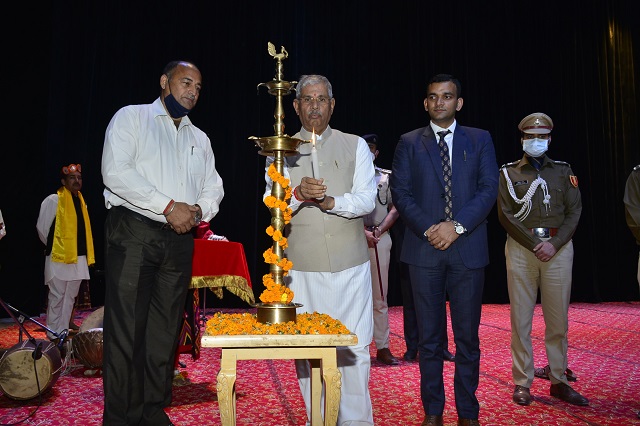 Governor Rajendra Vishwanath Arlekar said that the festival of Vijayadashami was the day of victory of good over evil. The significance of this day would be meaningful only when we would make our contribution in eradicating the social evil like drug addiction from the society.

The Governor was speaking in a program organized at Atal Sadan on the occasion of the formal inauguration of the International Kullu Dussehra Festival, last evening. He said that drug addiction was increasing rapidly in the society and youth were falling prey to it which was fatal. He added that everyone needs to be considerate about it and must contribute in taking concrete steps in this regard. He said that public participation was necessary on social issues. We should resolve that not only ourselves but also others have to be saved from the evil of drugs, said the Governor.

Shri Arlekar said that during school days he had read about Kullu Dussehra and got the privilege of coming here today by the grace of Lord Raghunath ji. He said that Dussehra of Kullu was different in many ways. It begins in Kullu, when it ends in the world over. This diversity further enriches our culture, he added. He said the peaceful completion of Rath Yatra was a big thing, for which the credit goes to the people of Kullu.

He said that Himachal Pradesh was the first state in the country which has achieved cent percent target in first dose of coronavirus vaccination. He said that the tribal district Kinnaur has also achieved 100 percent target of inoculating second dose to the adults. He congratulated the district administration for better arrangements in Kullu Dussehra.

Deputy Commissioner-cum-Vice Chairman of Kullu Dussehra festival committee Ashutosh Garg honoured and welcomed the Governor on the occasion. He said that due to Covid protocol only seven deities had been invited last year but this year the situation was much better as a result of the fast vaccination process. He added that this year 332 registered deities have been invited but commercial and cultural activities were restricted due to Covid protocol.