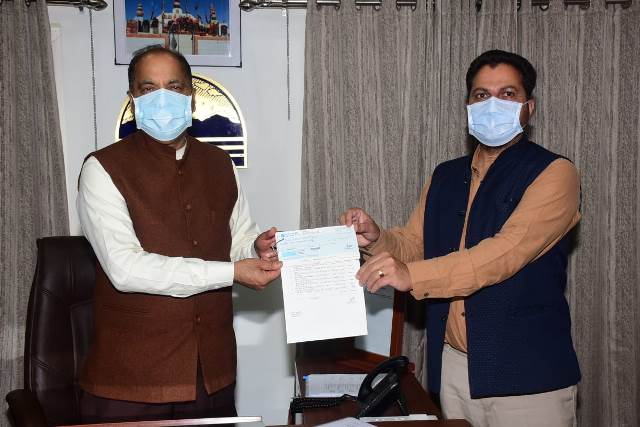 Chief Minister thanked the contributors for this noble gesture and said that such contributions go a long way in motivating the philanthropists and affluent sections of the society to liberally donate towards the Fund which could be utilized for helping the needy and poor people during the hour of distress.

Brig. Rajeev Thakur, Group Commandant, NCC Headquarters Shimla called on Governor Bandaru Dattatraya at Raj Bhavan, today. He urged the Governor to direct the State Universities to include NCC as a General Elective Credit Course as per the recommendation of University Grants Commission and All India Council for Technical Education.

The Governor gave a clarion call to all Vice-Chancellors to implement the decision of NCC as a General Elective Credit Course in Universities of Himachal Pradesh under choice based credit system to align with the New Education Policy (NEP).

Shri Dattatraya said that during Corona pandemic, NCC cadets were doing commendable job and had played an important role in the supply chain during last year as well. He said that the organization helped in instilling a sense of patriotism among students and in personality development. He added that it was need of the hour that the lessons of discipline and holistic development should be taught to the students through NCC.

On the occasion, Brig. Rajeev Thakur apprised the Governor that Group HQ NCC Shimla has five NCC Bns including one Girls NCC Bn, five Independent NCC Coys, one Naval Unit NCC and one Air Sqn. NCC spread over the 12 Districts of Himachal Pradesh and has a nurtured and well trained strength of 28,724 NCC cadets of all three wings of the defence forces. Currently NCC training was imparted as extra-curricular activity to volunteer students from recognized schools and colleges who enrol as cadets. He said that in 2013, CBSE and UGC issued circulars for introduction of NCC as elective subject on voluntary basis. Up to 2015, only 17 schools, 12 autonomous colleges and 42 non-autonomous colleges responded. He said that due to partial response, Ministry of Human Resource Development and UGC again issued a circular in 2016.

“To introduce NCC in the universities of Himachal Pradesh as a “General Elective Credit Course” under the Choice Based Credit System, in line with NEP 2020 with the objective of harnessing the full potential of NCC’s capacity in youth development and enlarging the student base taking up NCC training in the country”, he proposed.