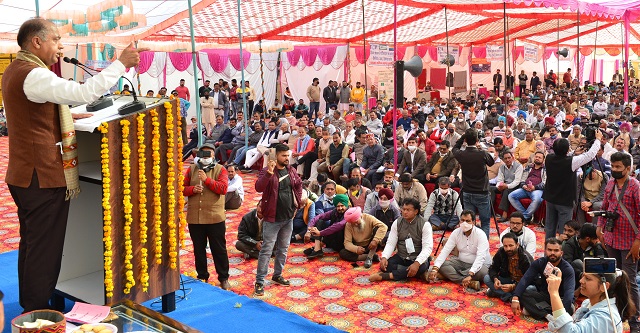 Inaugurates and lays foundation stones of 45 developmental projects worth about Rs. 116 crore at Mehatpur

The Cooperative societies were playing vital role in fulfilling the goal of social and economic upliftment of rural areas besides effective implementation of government-sponsored schemes such as public distribution system, distribution of fertilizers and agricultural equipment. Chief Minister Jai Ram Thakur stated this while addressing the State Level Function of 68th All India Cooperative Week at Mehatpur, in Una Vidhan Sabha area today.

Chief Minister said that it was a matter of pride for the people of the State that the first cooperative society in India was formed in the year 1892 in Panjawar village of Una district. He urged the people of the state to contribute in the cooperative movement with devotion and enthusiasm, so that the State could make a separate identity in the field of cooperatives. He said that ‘Prosperity through Cooperative’ has been the theme of this week. He said that there were 4843 different types of cooperative societies functioning in the State in which 17.03 lakh members have Rs. 490 crores share, Rs. 32788 crores as collateral and Rs. 42863.49 crores as working capital.

Chief Minister said that even during the time of pandemic, the State ensured that the pace of development goes uninterrupted. He said that Rs 450 crore Satellite Centre of PGI, Rs 550 crore Depot of Indian Oil, setting up of Rs. 35 crore modern bus stand at Una, in progress Rs. 20 crore Mother Child Hospital Una, etc. were a few projects dedicated to the people of the area. He said that unfortunately these all were not achievements to the opposition. He accused the previous Government of misleading the people of the State whereas on the other hand the present State Government was committed towards the welfare of the State and its people. He said that schemes such as Himcare, Sahara Yojna, Shagun Yojna has proved boon to the needy and the deserving, but all these seems to be no achievement for the opposition as for them achievements are scams worth cores of Rupees.

Chief Minister also congratulated the people of the State on the auspicious occasion of birth anniversary of Sri Guru Nanak Dev ji, the first Sikh Guru. He congratulated Nishad Kumar for this unique feat and said that the State Government would provide all possible help to the youth.

Chief Minister also honoured Nishad Kumar, Silver medallist from Una in Tokyo Para-Olympics by presented him a cheque of Rs. One crore. 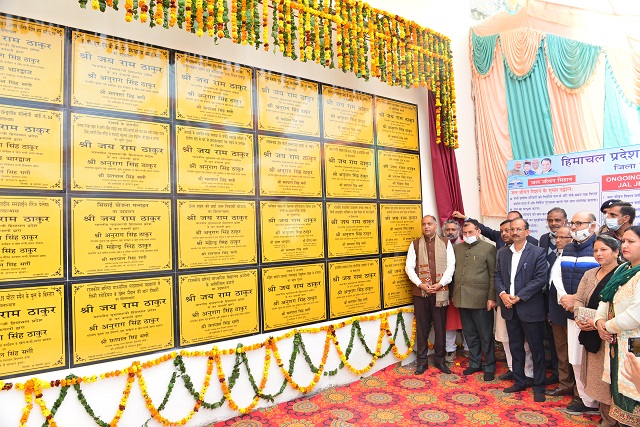 Rural Development and Panchayati Raj Minister Virender Kanwar thanked the Chief Minister for launching the Integrated Cooperative Project for the district. He said that this Project would go a long way in strengthening the economy of the farmers. He said that farmers should form cooperative societies for enhancing their income. He said that the development of the Nation and the State largely depends on the welfare and wellbeing of the farming community. He also thanked the Chief Minister for making provision of procurement of wheat within the State thereby saving the farmers from the middlemen.

Registrar Cooperative Societies Rajesh Sharma welcomed the Chief Minister and other dignitaries present on the occasion. He said that the Cooperatives were playing important role in strengthening the rural economy and women empowerment.